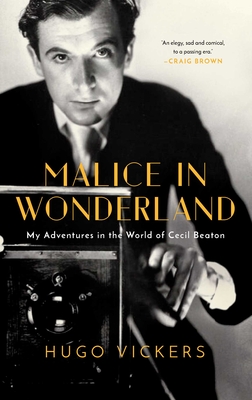 My Adventures in the World of Cecil Beaton

The witty and perceptive diaries kept by Cecil Beaton's authorized biographer during his many fascinating encounters with extraordinary—often legendary—characters in his search for the real Cecil Beaton.

Hugo Vickers's life took a dramatic turn in 1979 when the legendary Sir Cecil Beaton invited him to be his authorised biographer. The excitement of working with the famous photographer was dashed only days later when Cecil Beaton died. But the journey had begun - Vickers was entrusted with Beaton's papers, diaries and, most importantly, access to his friends and contemporaries.

In Malice in Wonderland, Vickers shares excerpts from his personal diaries kept during this period. For five years, Vickers travelled the world and talked to some of the most fascinating and important social and cultural figures of the time, including royalty such as the Queen Mother and Princess Margaret, film stars such as Grace Kelly, Audrey Hepburn and Julie Andrews, writers such as Truman Capote, and photographers such as Irving Penn and Horst. And not only Beaton's friends - Vickers sought out the enemies too, notably Irene Selznick. He was taken under the wings of Lady Diana Cooper, Clarissa Avon and Diana Vreeland.

Drawn into Beaton's world and accepted by its members, Vickers the emerging biographer also began his own personal adventure. The outsider became the insider - Beaton's friends became his friends. Malice in Wonderland is a fascinating portrait of a now disappeared world, and vividly and sensitively portrays some of its most fascinating characters as we travel with Vickers on his quest.

Praise For Malice in Wonderland: My Adventures in the World of Cecil Beaton…

“To call Hugo Vickers a ‘royal correspondent’ would be like calling Ernest Hemingway a war correspondent. A unique vantage on a rarified social terrain where privilege meets merit, and royalty and aristocracy slum it with writers and artists. Vickers supplies another pleasure of a lost age. When Mr. Vickers has his eye to the keyhole, we see a secret panorama.”
— Dominic Green

"Encounters with the rich and famous alongside the noted photographer, painter, and costume designer... An assemblage of star-studded recollections of a faded world."
— Kirkus

"A fascinating document, a window on to a lost world of glamour, grandeur and snobbery . . . an elegy, sad and comical, to a passing era."
— Craig Brown

"I got as caught up in these distant but strangely evocative events as Vickers did . . . delicious in its way, recreating a lost world."
— Ysenda Maxtone Graham

"A luxuriant trawl through the recovered past . . . extraordinary book."
— John Walsh

"A quite brilliant record of a fading social and artistic milieu . . . a world to which Vickers is an unrivalled cicerone."
— Matthew Sturgis

"Vickers' diaries bristle with injudicious indiscretion...it is no small compliment to say that the biographer is here the equal of his subject."
— Michael Arditti

"Vickers - as ever - is a warm and enthusiastic guide to a nearly lost world."
— Tatler.com

Hugo Vickers is a writer, lecturer and broadcaster, and an acknowledged expert on the British Royal Family. He has written biographies of the Queen Mother, Cecil Beaton, Vivien Leigh, Princess Andrew of Greece and the Duchess of Windsor. His book The Kiss won the 1996 Stern Silver Pen Award for Non-Fiction. His recent bestsellers have included The Quest For Queen Mary and The Sphinx - the life of Gladys, the Duchess of Marlborough.
Loading...
or
Not Currently Available for Direct Purchase