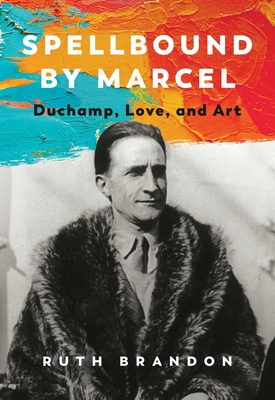 In 1913 Marcel Duchamp's Nude Descending a Staircase exploded through the American art world.  This is the story of how he followed the painting to New York two years later, enchanted the Arensberg salon, and—almost incidentally—changed art forever.

In 1915, a group of French artists fled war-torn Europe for New York.  In the few months between their arrival—and America’s entry into the war in April 1917—they pushed back the boundaries of the possible, in both life and art.  The vortex of this transformation was the apartment at 33 West 67th Street, owned by Walter and Louise Arensberg, where artists and poets met nightly to talk, eat, drink, discuss each others’ work, play chess, plan balls, organise magazines and exhibitions, and fall in and out of love.  At the center of all this activity stood the mysterious figure of Marcel Duchamp, always approachable, always unreadable.  His exhibit of a urinal, which he called Fountain, briefly shocked the New York art world before falling, like its perpetrator, into obscurity.

Many people (of both sexes) were in love with Duchamp. Henri-Pierre Roché and Beatrice Wood were among them; they were also, briefly, and (for her) life-changingly, in love with each other.  Both kept daily diaries, which give an intimate picture of the events of those years.  Or rather two pictures—for the views they offer, including of their own love affair, are stunningly divergent.

Spellbound by Marcel follows Duchamp, Roché, and Beatrice as they traverse the twentieth century. Roché became the author of Jules and Jim, made into a classic film by François Truffaut.  Beatrice became a celebrated ceramicist. Duchamp fell into chess-playing obscurity until, decades later, he became famous for a second time—as Fountain was elected the twentieth century’s most influential artwork.

Praise For Spellbound by Marcel: Duchamp, Love, and Art…

“Beatrice Wood is effectively the protagonist and certainly the most appealing subject of Spellbound by Marcel: Duchamp, Love, and Art. Her élan is legendary. Hellbent on breaking free of the expectations of her upbringing, Wood seems to me a singular, wild-card creative personality of the twentieth century. Brandon contributes a fair amount to what the milieu was like for a shifting cast of characters who focused and intensified a transformative Zeitgeist. Glimpses into their romantic entanglements provide a flickering, you-are-there perspective.”
— Peter Schjeldahl, The New Yorker

"Spellbound by Marcel is a group biography which charts the triangulated love affair between Duchamp, Beatrice Wood, and Henri-Pierre Roche, and the others who crossed their paths and their beds. The portrait Brandon sketches of Wood is especially winning. She comes across with novelistic vibrancy. A delicious and deeply researched portrait of its time.”
— Lauren Elkin, The New York Times Book Review

“Cultural historian and novelist Brandon explores how and why a large group of sophisticated, talented people fell under the spell of the mysterious, enigmatic artist Marcel Duchamp. Drawing on revealing letters, diaries, and memoirs, Brandon’s buoyant, meticulous story begins in 1913 with New York’s Armory Show of new European art, including Duchamp’s Nude Descending a Staircase. The plot thickens as Brandon pauses to discuss Duchamp’s Fountain, a groundbreaking “readymade” piece in the form of an upside-down urinal with puzzling “R. Mutt 1917” lettering. An elaborate, spicy, period piece tell-all.”
— Kirkus Reviews

"Drawing on the stories of the Arensbergs and three principal figures in their salon—Duchamp, Beatrice Wood, and Henri-Pierre Roché—Brandon has woven a narrative that intermingles complex romantic entanglements with persistent artistic aspirations."
— New York Journal of Books

"Spellbound by Marcel makes for enjoyable reading. The revolving door of affairs, breakups, betrayals, and wild avant-garde stunts is quite juicy. It’s also impressively researched. Brandon speaks with the authority that comes from intimate familiarity with the key players’ own words about their lives."
— Daily Art Magazine

"Brandon is a congenial stage manager, adept at presenting and dismissing her dramatis personae. Unblushing, she dispenses salacious gossip, patiently decoding the diaries of Roché."
— The Spectator

"As entertaining as the contemporary works of fiction such lives inspired, Brandon displays a keen understanding of a complex educational system that kept its subjects ignorant even while purporting to enlighten.”
— The New Yorker

“Brandon's chronicles are poignant. It is important to remember what a great, necessary and arduous achievement the education of women was.”
— The Wall Street Journal

“A masterly survey. Even when donning her sociologist's hat, Brandon is still lively as well as humane. Fairly sizzling with fascination.”
— Washington Times

“As a biographer, she provides brilliantly detailed backgrounds on her subjects, leaving the reader wanting still more. A very interesting look into the struggle to create parity between the sexes in this era. Recommended for both public and academic libraries.”
— Library Journal

"A ripping account of celebrity and magic. Brandon has chosen a fascinating subject and written a book that rises to it superbly. A compelling account of a peculiar life.”
— The Sunday Times (London)

Ruth Brandon is an acclaimed novelist and cultural historian. She is the author of Houdini (Random House); The Spiritualists (Knopf), and Ugly Beauty: Helena Rubinstein, L'Oréal, and the Blemished History of Looking Good (Harper). She lives in London.
Loading...
or support indie stores by buying on