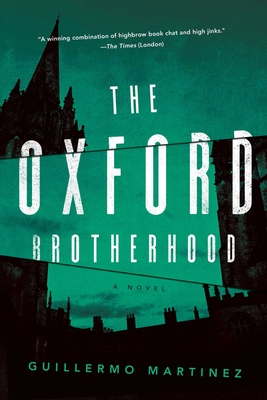 This literary thriller set at Oxford University puts talented mathematics student G at the center of a murder mystery sparked by the discovery of hidden secrets in the life of famed author Lewis Carroll.

Mathematics student G is trying to resurrect his studies, which is proving difficult as he finds himself drawn into investigating a series of mysterious crimes. When Kristen, a researcher hired by the Lewis Carroll Brotherhood, makes a startling new discovery concerning pages torn from Caroll's diary, she hesitates to reveal to her employers a hitherto unknown chapter in his life. Oxford would be rocked to its core if the truth about Lewis Carroll's relationship with Alice Liddell—the real Alice—were brought to light.

After Kristen is involved in a surreal accident and members of the Brotherhood are anonymously sent salacious photographs of Alice, G joins forces with Kristen as they begin to confront that sinister powers that are at work. More pictures are received, and it becomes clear that a murderer is stalking anyone who shows too much interest in uncovering certain aspects of Lewis Carroll's life.

G must stretch his mathematical mind to its limits to solve the mystery and understand the cryptic workings of the Brotherhood. Until then, nobody—not even G himself—is safe. A thrilling novel inspired by true, strange stories from Lewis Caroll's life, The Oxford Brotherhood is sure to make you curiouser and curiouser.

Praise For The Oxford Brotherhood: A Novel…

Praise for The Oxford Brotherhood:

"In 'The Oxford Brotherhood,' Martinez reunites his unnamed narrator and Professor Arthur Seldom as they attempt to solve a series of crimes involving a missing page from Lewis Carroll’s diaries. Sounds good already, doesn’t it?...'The Oxford Brotherhood' — translated by the multilingual Alberto Manguel — is a clever who-and-howdunits and quite satisfying."

"I love a good mystery set in the halls of academe — an intellectual puzzler with emotional substance....Martínez assuredly steers the plot to a conclusion that is equally preposterous as it is inevitable. That’s the mark of a writer who’s spent decades steeped in mystery plot twists."
— The New York Times

Praise from England for Guillermo Martinez:

"Well crafted and deeply entertaining.”
— The London Review of Books

“An unusual blend of murder most foul and mathematics most pure. A playful intellectual exercise.”
— The Daily Mail

"An intellectual thriller that can be much enjoyed even by those whose grasp of mathematics is limited. If you like your detective stories gore-free, with a strong crossword-solving element, this is for you.”
— The Times (London)

Guillermo Martínez was born in Bahía Blanca, Argentina. He is a doctor of Mathematical Science and a writer. His novel The Oxford Murders was awarded the prestigious Nadal Award and was made into a film starring Elijah Wood and John Hurt. The book has sold over 400,000 copies worldwide and been translated into more than forty languages. Martinez lives in Argentina.
Loading...
or support indie stores by buying on