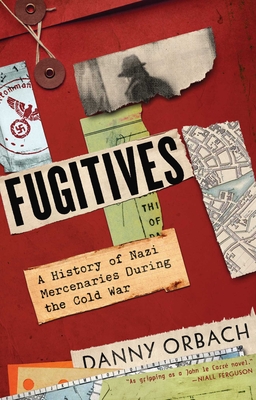 A History of Nazi Mercenaries During the Cold War

Shrouded in government secrecy, clouded by myths and propaganda, the enigmatic tale of Nazi fugitives in the early Cold War has never been properly told—until now.

In the aftermath of WWII, the victorious Allies vowed to hunt Nazi war criminals “to the ends of the earth.” Yet many slipped away to the four corners of the world or were shielded by the Western Allies in exchange for cooperation.

Most prominently, Reinhard Gehlen, the founder of West Germany's foreign intelligence service, welcomed SS operatives into the fold. This shortsighted decision nearly brought his cherished service down, as the KGB found his Nazi operatives easy to turn, while judiciously exposing them to threaten the very legitimacy of the Bonn Government. However, Gehlen was hardly alone in the excessive importance he placed on the supposed capabilities of former Nazi agents; his American sponsors did much the same in the early years of the Cold War.

Other Nazi fugitives became freelance arms traffickers, spies, and covert operators, playing a crucial role in the clandestine struggle between the superpowers.  From posh German restaurants, smuggler-infested Yugoslav ports, Damascene safehouses, Egyptian country clubs, and fascist holdouts in Franco's Spain, Nazi spies created a chaotic network of influence and information. This network was tapped by both America and the USSR, as well as by the West German, French, and Israeli secret services. Indeed, just as Gehlen and his U.S sponsors attached excessive importance to Nazi agents, so too did almost all other state and non-state actors, adding a combustible ingredient to the Cold War covert struggle.

Shrouded in government secrecy, clouded by myths and propaganda, the tangled and often paradoxical tale of these Nazi fugitives and operatives has never been properly told—until now.

Praise For Fugitives: A History of Nazi Mercenaries During the Cold War…

"Uncovering incredible details from Mossad’s previously unseen archives, Orbach’s excellent book reveals the truth of what was, until now, a murky legend: the astounding collaboration between fugitives of the Third Reich and the secret services of both Soviet and West-allied powers, including Israel itself."
— Roger Faligot, author of Chinese Spies

“Nazism did not end in 1945. Many Nazis found refuge in the Middle East, some to continue their ideological war, others for escape and personal gain. Many got involved in the Cold War ‘Great Game’ of intelligence. Based on a wealth of hitherto never explored sources, Orbach’s compelling new book is a must read for anyone interested in the history of the Middle East and the postscript of WWII.”
— Professor Shlomo Shpiro, Chairman of the International Intelligence History Association and Co-Editor-in-Chief of the Journal of Intelligence History

“Danny Orbach tells the amazing story of a twenty-year postwar era in which former Nazi spies and soldiers found ways to continue plying their trade across Europe and the Middle East. Fugitives is a profoundly researched, highly original, and compulsively readable book which paints an often-shocking picture of postwar Germany and its connections to the wider world.”
— Benjamin Hett, professor of History, Hunter College and the Graduate Center and the author of The Nazi Menace: Hitler, Churchill, Roosevelt, Stalin, and the Road to War

“While the post-1945 careers of German scientists such as Wernher von Braun are well known, much less has been written about the intelligence agents who went from serving Hitler to serving the United States and its Cold War allies—including even Israel. Danny Orbach has delved deeply into notoriously inaccessible sources to uncover the murky stories of Reinhard Gehlen, Hermann Baun, Heinze Felfe, and other ex-Nazis who reinvented themselves. Anti-communism was the one element of Hitler’s ideology that could easily be repurposed after 1945. The problem, as Orbach shows, was that not every former Nazi was content to focus on the Soviet threat. Some (such as Felfe) were just as ready to side with Moscow against the West. Few rogues’ galleries can compare with the cast of turncoats, double agents, and merchants of death in Fugitives. I found it as gripping as a John le Carre´ novel.”
— Niall Ferguson, Milbank Family Senior Fellow, the Hoover Institution, Stanford, and author of Kissinger, Volume I: 1923–1968: The Idealist

"Orbach draws a richly detailed story of the extensive role of German intelligence and military advisers in the Cold War decades. The book is full of shady characters and preposterous plots, making it an entertaining read for fans of real-life espionage history. A lively history of the role played by former Nazis in the postwar intelligence community."
— Kirkus Reviews

"Riveting. The historian and former Israeli Army intelligence operative Daniel Orbach has written a horrifying and entertaining account of the role played by former (or so they claimed) Nazis in Cold War espionage. Tragicomedy is the keynote of the book. One salutes Orbach for his assiduous delving into so many archives, including previously unopened Mossad files, and truffling out so many riveting stories."
— Jake Kerridge

Praise for The Plots Against Hitler:

"The Plots Against Hitler provides a definitive history of the anti-Nazi underground’s efforts to overthrow the Nazi dictator. A riveting read well worth picking up.”
— Jewish Book Council

"In this comprehensive history, Israeli historian Orbach scrupulously analyzes the resistance movements that opposed the Nazis from 1933 to 1945. His superb research includes interviews with resistance survivors, family members, and relevant records from archives around the world. Likely to become the definitive general history of the subject and the starting place for all future research, Orbach’s work is a fascinating story of courage and an excellent study of the struggle of individuals to act morally and honorably.”
— Publishers Weekly

"This fresh look at the German Resistance will be appreciated by students of World War II history.”
— Library Journal

"A robust history of the German conspiracy against Nazism. A gripping look at a historical counternarrative that remains relevant and disturbing.”
— Kirkus Reviews

Dr. Danny Orbach is an associate professor in the History and Asian Studies Departments at the Hebrew University of Jerusalem. He received his PhD from Harvard University. His prior books include The Plots against Hitler and Curse on this Country: The Rebellious Army of Imperial Japan. The Plots against Hitler has been published in seven languages. Danny lives in Jerusalem.
Loading...
or support indie stores by buying on