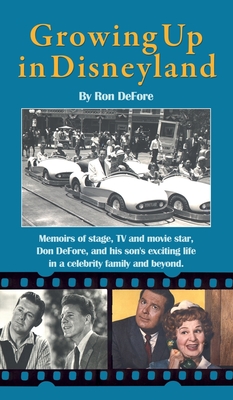 Growing Up in Disneyland

Note: This is not a book all about Disneyland.

Growing up in Disneyland" is part biography about Ron's father, Broadway, movie, and TV star, Don DeFore, and his own autobiography. Don DeFore earned a star on Hollywood Boulevard's Walk of Fame and was a household name in the 1950s and 60s. He co-starred in numerous feature films with many Hollywood legends, TV shows, and live theater. He is best known for "The Adventures of Ozzie and Harriet" in which he played the next-door-neighbor, "Thorny," and his co-starring role as "Mr. B" in the 1960s TV series, "Hazel." The book includes much of Don's unpublished autobiography, "Hollywood-DeFore 'n After.