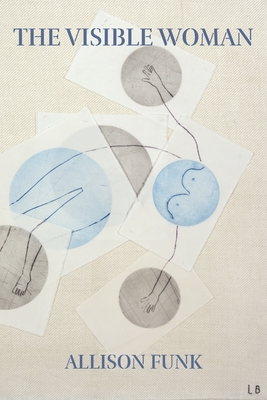 In The Visible Woman, Allison Funk writes of how women often disappear into the roles expected of them, becoming invisible to themselves. To fill in "the thin / chalk outline" of herself that she's "drawn and erased" for as long as she can remember, Funk returns to the anatomical model of "The Visible Woman" she left unassembled as a child. With poems rather than the kit's plastic organs and bones, she strives to "create a likeness / to embody herself." In her efforts at self-representation, the poet is guided by the visual artist Louise Bourgeois- her real-life model of a woman who proved that art gives us a way of recognizing ourselves.

In The Visible Woman, "with the care of a surgeon closing a wound," Allison Funk stitches together the scars of memory, loss, and grief, reclaiming a voice and visibility against a patriarchal erasure of women. In the care of her deft hands and uncompromising vision, I find myself not stunned into silence, but startled into the desire to advocate, to speak. -Jenny Molberg

In the beautifully crafted, urgent poems of The Visible Woman, Allison Funk probes the layers of the conflicted self: the artist in relation to her body. Hers "is a story of how we disappear," but like the black hole she is drawn to, which emits the "oldest, longest, lowest note in the universe," the poet sings herself into sight. -Cleopatra Mathis

The exquisite poems in Allison Funk's latest collection address the burdens and blessings of a woman's flesh. In it, her attention moves from a child's discomfort with a plastic Visible Woman to the brave self-exposure of a woman artist painting her own nudity. This is a collection to return to on our own body's journey from the womb to the necessary relinquishing of the visible. -Marjorie Stelmach

Like her brilliant mentor and muse Louise Bourgeois- whose "Cells" series of installations might almost be a palimpsest for The Visible Woman- Allison Funk brings to each poem/cell a superlative physical awareness; but whatever she writes also brims, as for Bourgeois, with psychic content that, however subtly presented, is more than merely arresting. Funk operates on an existential knife-edge, and, the reader is privileged to behold "...the writer/ nearly done for, creating a likeness/ to embody herself."-Sydney Lea

Allison Funk is the author of five previous books of poems, including Wonder Rooms, from Free Verse Editions of Parlor Press. The recipient of a fellowship from the National Endowment for the Arts, the Samuel French Morse Poetry Prize, and the Society of Midland Authors Poetry Prize, she is a Professor Emerita at Southern Illinois University Edwardsville.