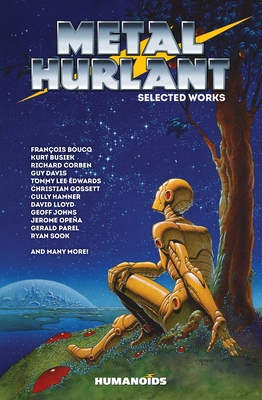 "Métal Hurlant" magazine was created in Paris in 1974 by Moebius, Druillet and Dionnet, the founding fathers of Les Humanoïdes Associés. This movement soon revolutionized the medium and inspired countless writers, artists and filmmakers the world over. Versions in various languages flourished everywhere, including in the States with "Heavy Metal." The French version was eventually shut down in 1987. But in 2002, Humanoids relaunched a limited publication of a 13-issue anthology, with one main goal: establishing a creative bridge between the US and Europe.

Kurt Busiek has been writing comics professionally since three days before he graduated from college in 1982, when he sold a "Tales of the Green Lantern Corps" backup story that appeared in "Green Lantern #162." Since then, he's worked on just about everything from "Action Comics" to "Zot!," including runs on "Avengers," "Superman," "Conan" and others, and has co-created "Thunderbolts," "The Autumnlands," "Arrowsmith" and more. He's best known for his work on the multiple-award-winning "Marvels" and "Astro City."
Loading...
or
Not Currently Available for Direct Purchase