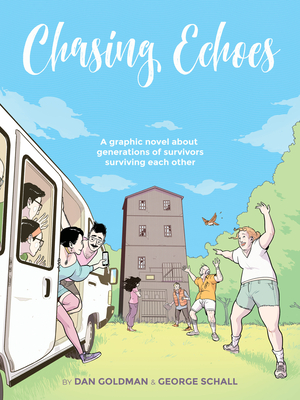 Chasing Echoes is a heartfelt and offbeat tale about dysfunctional family dynamics, self-discovery and rebirth in the wake of loss.

Malka, the black sheep of her family, learns that her relatives are making a decades-in-the-planning pilgrimage to their grandfather’s pre-Holocaust home in Poland...and she wasn’t invited. After guilt-tripping herself a ticket as the self-appointed “Keeper of the Family Archives,” it becomes clear that everyone’s brought more baggage than just their suitcases.

"A remark­able book that con­nects the past and present effort­less­ly, invit­ing read­ers on a heart-wrench­ing and, ulti­mate­ly, sat­is­fy­ing jour­ney of a family’s rec­on­cil­i­a­tion with his­to­ry and themselves."
— JEWISH BOOK COUNCIL

​DAN GOLDMAN is a narrative designer and visual storyteller working in comics, television, interactive media and video games. Creator of the Eisner-nominated SHOOTING WAR webcomic, he also covered an entire presidential election in comics form in real-time with “08", told psychedelic tropical ghost stories in RED LIGHT PROPERTIES and created an Indian feminist icon to stand up for victims of violence against women with PRIYA’S SHAKTI. He has also produced Emmy-winning experiences for AMC Television, written two video games based on The Walking Dead and episodes of animated series for television. Dan currently serves as Narrative Lead at Kinjin Story Lab, where he incubates story-based projects at the intersection of technological innovation and social good. He lives in Los Angeles with his partner and two cats.​

32 years old, brazilian - born and raised in São Paulo, George is both a writer and illustrator. He co-authored and illustrated three brazilian graphic novels titled SABOR BRASILIS (2013, Zarabatana Books), MOSCHITTO (2013, Fictícia) and HITOMI (2016, Balão Editorial) and also made short stories for numerous anthologies like "Monica's Gang" MSP 50 (2011, Panini), INKSHOT (2015, Monkeybrain), Dark Horse Presents (2012-2016, Dark Horse Comics), Planet of the Apes: The Time of Man (2018, Boom! Studios). Also worked in cinema as animation/art director and as illustrator for several international companies and magazine publishers. Currently lives in Barcelona, streams his work online on Twitch and tries to develop a full beard. Hasn't had much success so far.
Loading...
or support indie stores by buying on
(This book is on backorder)