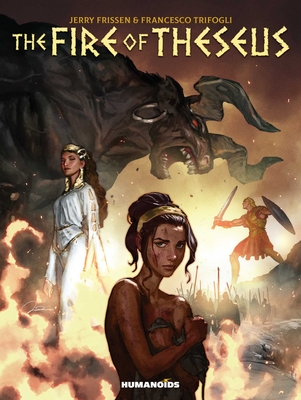 The Fire of Theseus

The true story of Theseus and the Minotaur.


Everyone thinks they know Theseus, the great Hero of Athens. But what legend has retained is merely a web of lies, a fable to hide the truth—a truth that time was not ready to accept... It's time Her story was told.

Jerry Frissen (born Thierry Frissen in Belgium) is an American comic book writer and toy & graphic designer. He is the senior graphic designer at Humanoids as well as the author of several best-selling graphic novels, including the anthology comic book series "Lucha Libre" ("Unfabulous Five," "The Tikitis"), "The Zombies That Ate The World" ("The Z Word") and the new cycle of the internationally acclaimed series "The Metabarons," co-written with Alejandro Jodorowsky and illustrated by Valentin Sécher, Niko Henrichon and Esad Ribic, under the title "The Metabaron." In addition to his work on "The Metabaron," Jerry Frissen is also the author of the forthcoming sci-fi thriller "Exo" (March 2018).

Francesco Trifogli was born on March 5, 1978 in Rome. Though he attended a year at the Scuola Romana del Fumetto, he is predominantly a self-taught draftsmen and scriptwriter. He won the jury award at Lucca Comics & Games in 2009, just one year after its first publication. In 2012, he began his collaboration with Vertigo, illustrating a brief history for the volume Mystery in Space and the monthly series Hinterkind. In France, he worked with Éditions Tabou for which he wrote and drew seven erotic volumes and with Petit à Petit on the historical volume Le Havre.
Loading...
or
Not Currently Available for Direct Purchase