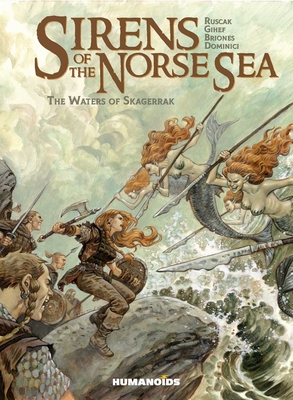 Sirens of the Norse Sea

The Waters of Skagerrak

Fierce Vikings and mystical Sirens face each other in a never-ending battle to claim the most significant natural resource their world has to offer: the sea itself.

For generations, Viking clans have faced Siren tribes in battles waged on land and sea—battles that pit brute strength against sorcery and cunning versus charm. Their war has torn apart the very world they fight over while filling graveyards that span farther than the eye can see.

Praise For Sirens of the Norse Sea: The Waters of Skagerrak…

“Adapted from Isabelle Bauthian’s original work, “Sirens Of The Norse Sea" from writer Françoise Ruscak and artist Phil Briones is a stunning tale of high-fantasy on a mythical sea full of beats and wonders alike. A hit overseas, this graphic novel is finally available here in the States for your reading pleasure!….Mixing popular mythology with intense action and wildly imaginative fantasy, Sirens of the Norse Sea is a wondrous tale to behold for fans of the genre.”
— MONKEYS FIGHTING ROBOTS

Philippe Briones is a French Artist who first started his career at Disney animation Studios, where he contributed to 9 movies over a decade (Hercules, Tarzan, Kuzco, Emperor’s New Groove…). His French career as an author started with successful titles such as La Geste des Chevaliers Dragons and Kookaburra. He has released about fifteen titles in Europe. His first US comics contract was signed with Marvel. He worked on Iconic characters such as Iron-Man, Spiderman, X-Men, or Captain America. He was then approached by DC Comics to work on ongoing series such as Suicide Squad, Aquaman, Batman Detective Comics or Justice League and Justice League Odyssey.
Loading...
or support indie stores by buying on