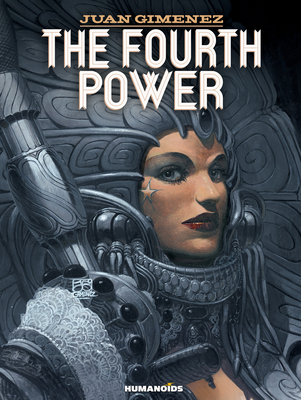 The odyssey of Exether Mega, a young military pilot caught up in an interplanetary conflict between humans — under the banner of the Planetary United States — and the Krommiums. After narrowly escaping an attack by an enemy patrol, Mega begins a perilous journey across enemy lines. Through a series of encounters —with both friends and foes — Mega discovers she's at the center of a complex, secret experiment to create the ultimate weapon of war. As further clues to her role, identity, and destiny are revealed to her, the powers that be ramp up their efforts to capture her. A spectacular and riveting space opera by the creator of Leo Roa and the illustrator of The Metabarons saga.

Praise For The Fourth Power…

"[It's] it's not entirely unlike Jodorowsky's own work, both in terms of happy excess and spiritual yearning in a fallen, sleepy society." - Jog - The Blog "Spaceships… aliens… and that slightly-odd way of looking at science fiction the French do so well." - It Doesn't Have To Be Right... ""Juan Gimenez. Argentinian. Best European sci-fi/fantasy artist alive. Prodigiously fertile imagination and output."" - Guillermo Del Toro

On April 2nd, 2020, he passed away in his home province of Mendoza, Argentina, from COVID-19 complications.