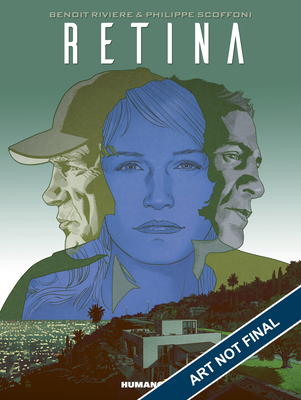 Los Angeles, 2030. Criminagent Milo Deckman witnesses the murder of a woman in the street. At the morgue, retinal identification indicates not one but two identities...and two men successively recognize the cadaver as that of their wife.

Born in June 1976 in Bordeaux, Benoît Rivière has always been passionate about comics. He began as a comic columnist for several public newspapers, allowing him to establish his first contacts with publishers. He then spent a year overseas where he devoted himself to screenwriting. In 2006, he published Missy with La Boite a Bulles, which helped to establish his reputation as a comic creator. In search of a draftsman for an SF project, he met Philippe Scoffoni on the internet, with whom he collaborated on Retina.

Philippe Scoffoni resides in Paris, where he worked tirelessly on the EXO series. A longtime fan of comics, he began his career as a storyboard artist for advertising agencies. In 2017, he worked on his first graphic novel series “Milo” with Benoît Rivière (Delcourt). His realistic, detailed and vivid art style has quickly found favor in the industry.
Loading...
or support indie stores by buying on