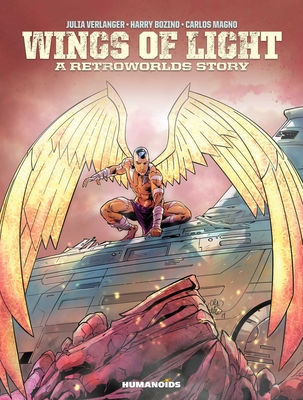 Two Earthlings find themselves at the mercy of a stringent religious sect on a far-off planet when they rescue a young woman with a bizzare secret!

In the distant future, Earthlings explore worlds scattered at the far reaches of the cosmos, on which civilizations have often forgotten they are descendants of settlers from Earth. Two young agents on a mission visit a planet that has reverted to a medieval way of life, but when they save a young pregnant woman who has been sentenced to death for mating with a mysterious and mythical "angel with wings of light,” they find themselves entrenched in political turmoil with a religious party who has ascended to power.

Born in 1989 in the south of France, Harry Bozino studied cinema in Paris and New York. After working as an assistant on some feature films, he wrote and directed several clips and short films, including La Vieillesse Dans La Peau and Le Dernier Noël, which will be broadcast on OCS, Ciné + and in many festivals in Europe. In 2014, he won the 48 Hour Film Project contest and went to Paris for the international final in Los Angeles. The same year, he produced and directed Playground, a short film in partnership with the Canon brand. In 2017, he realized a childhood dream by embarking on the comic book scene at Humanoids. He adapted the work of Julia Verlanger (Planètes Orphelines) and the novel Point Zero by Antoine Tracqui. Harry also works as a cinematographer, screenwriter and director for the internet and television. Passionate about traveling, he directed in 2017 and 2018 a series of very short films on the theme of adventure and travel. The first episode, "Namaste, A Journey Through Nepal," was shot in the Himalayas and the second, Avannaq, in Greenland.