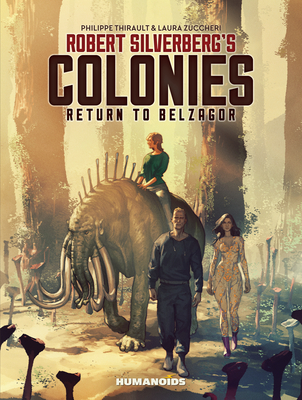 Ex-lieutenant Eddie Gundersen returns to Belzagor on a scientific expedition to the borders of the indigenous lands, where he must face his nemesis, Kurtz, and his own inner demons on a planet which still has hidden secrets. COLONIES: Return to Belzagor is a new edition of the previously released Downward to the Earth (2017). It has been edited for content.

Laura Zuccheri is an Italian artist who has worked on numerous Italian publications including "Ken Parker" magazine, "The Condemned" and "Hardware" (Sergio Bonelli). She won the The Grand Guinigi Award for Best Art at Lucca Festival for her "Swords of Glass" work. Philippe Thirault is a French novelist and comics writer who was born in Paris in 1967. In the late 1990s, he published the novel Feathered Serpent, the trilogy Hemoglobin Blues, and his first comic series, the critically acclaimed Miss: Better Living Through Crime. He has since become a very prolific comic book creator, writing series such as Thousand Faces, The Hounds of Hell, Balkans Arena and Mandalay. He often writes stories with a historical or fantastic setting and runs writing workshops in Paris.
Loading...
or
Not Currently Available for Direct Purchase