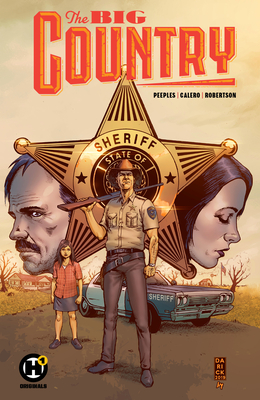 A gritty Western standoff between a cop and a murderer. The Old West finally died in 1980. But we're in Texas, and it's 1978. This is the story of Grissom Callahan, the last in a long line of sheriffs. Callahan learned everything he knows from his father and grandfather, but the ways of the old regime don't prove effective when a violent killer emerges in their small town. In a single moment of shaking down an informant, Grissom triggers a chain of events that will reshape his life and the world of Texas law enforcement.

​Dennis Calero was raised in Miami Beach, Florida and attended the New World School of the Arts high school, and the prestigious Pratt Institute, where he studied architecture before smartening up and switching majors to illustration and film. He started writing and drawing comics and his client list includes Marvel and DC comics, Time/Warner and Sony Entertainment. He's also dabbled in stand up in New York City. He helped develop "Xmen Noir" for Marvel Comics and, with writer and actor Todd Stashwick, Calero co-wrote the pilot script "Clandestine" for SyFy.
Loading...
or
Not Currently Available for Direct Purchase