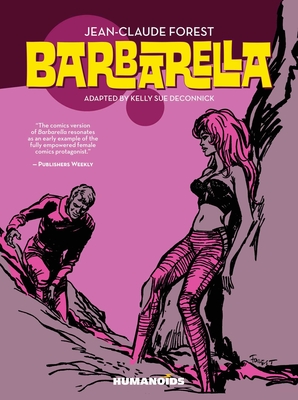 Barbarella’s spaceship breaks down, she finds herself trapped on the planet Lythion. There, she has a series of adventurous, and bawdy, encounters with a variety of strange beings, from robots to angels.

“The feisty French comic book siren Barbarella, who made her debut in 1962, was ahead of her time—but also of it.”
— The New York Times

“It’s as close as English-language readers will get to the 'humor and the expression of liberty' that Forest desired.”
— Comics Journal

Kelly Sue DeConnick is best known for surprise hits like Carol Danvers' rebranding as Captain Marvel and the Eisner-nominated mythological western, Pretty Deadly; the latter was co-created with artist Emma Ríos. DeConnick's most recent venture, the sci-fi kidney-punch called Bitch Planet, co-created with Valentine De Landro, launched to rave reviews in December 2014 and has since been nominated for an Eisner. DeConnick lives in Portland, Oregon, with her husband, Matt Fraction, and their two children. Under their company Milkfed Criminal Masterminds, Inc., DeConnick and Fraction are currently developing television for NBC/Universal.

​Jean-Claude Forest was a true innovator of the comics scene of the 1960s and the 1970s, mainly because of the classic 'Barbarella' series. He made his debut at the publishing house Élan, where he drew comics like 'Le Vaisseau Hanté', 'Hyppolite et les Diamants de Pésetas-City'. He then worked for the magazines O.K., Caméra 34 and Vaillant. For the latter, he created the 'Copyright/Copyrit' series. he joined the S.P.E. ('Société Parisienne d'Édition) in 1952, where he took over the 'Charlot' character and began series like 'Mike Hagarth'. Throughout the 1950s, he was an illustrator for numerous magazines and pocket books.​
Loading...
or support indie stores by buying on
(This book is on backorder)