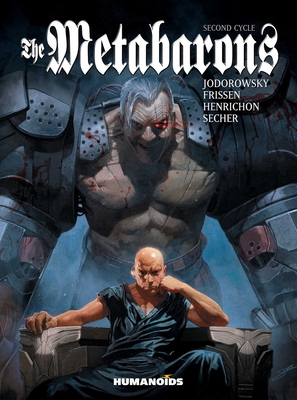 The Metabaron is back in a new collected edition!

Writer/director/ producer David S. Goyer (Man of Steel, Batman v Superman: Dawn of Justice) called The Metabarons: “The greatest work of graphic fiction ever produced,” and it has sold millions of copies globally.

Praise For The Metabarons : Second Cycle…

Praise for The Metabarons Series


"What keeps me going back to The Metabarons is the immense volume and speed of its innovation. There is literally a new and mad idea on every page."
— Warren Ellis

"The Metabaron cycle (...) is, to my mind, the greatest work of graphic fiction ever produced."
— David S. Goyer

"[A] magnum opus of unadorned emotion and one that will surprise you in its thoughtfulness and craft."
— All-Comic

Jerry Frissen (born Thierry Frissen in Belgium) is an American comic book writer and toy & graphic designer. He is the senior graphic designer at Humanoids as well as the author of several best-selling graphic novels, including the anthology comic book series "Lucha Libre" ("Unfabulous Five," "The Tikitis"), "The Zombies That Ate The World" ("The Z Word") and the new cycle of the internationally acclaimed series "The Metabarons," co-written with Alejandro Jodorowsky and illustrated by Valentin Sécher, Niko Henrichon and Esad Ribic, under the title "The Metabaron." In addition to his work on "The Metabaron," Jerry Frissen is also the author of the forthcoming sci-fi thriller "Exo" (March 2018).

At only 29, Valentin has already been published by Titan Comics (Khaal) and Humanoids (The Metabaron Book 1 & 3). A rising star in the European comics scene, he took up the challenge of following in the footsteps of Juan Gimenez, creating his own version of Jodorowsky's universes: cinematic landscapes and beautiful, realistic fight scenes.

Niko Henrichon is a Canadian comic artist most known for Pride of Baghdad (Vertigo) and Noah (Image), the former earning him an Eisner nomination for Best Penciller/Inker. He has also worked on Fables, New X-Men, Sandman and Spiderman in addition to his covers of Fantasic Four and X-Men.
Loading...
or support indie stores by buying on