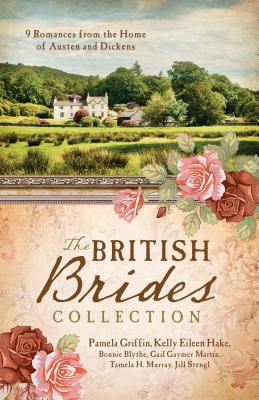 9 Romances from the Home of Austen and Dickens

Romance from the Spectacular British Isles
Spanning over 500 years of history in the British Isles, nine inspiring romance stories take readers through English gardens, around London ballrooms, and within Scottish castles. Follow along as each of the brides-to-be encounter high drama and epic romance on the way to the altar. Will they survive with their faith intact?

Inspired by authors like Jane Austen and Charles Dickens, these nine romances are penned by an exclusive selection of Christian fiction authors and will become a cherished favorite for fans of British history and literature.

Fayre Rose by Tamela Hancock Murray
Scotland 1358 – Fayre was brought to Kennerith Castle to tend the duke’s rose garden in payment for her father’s taxes. When the Laird Kenneth falls ill with plague, only Fayre is brave enough to play nursemaid.

Woman of Valor by Jill Stengl
England 1631 - Helen has come to Marston Hall to care for three neglected children and a household in disarray. Both the gardener and the lord of the manor admire her inner beauty.

Fresh Highland Air by Jill Stengl
Scotland 1748 – When Hermione’s stepfather takes over Kennerith Castle, he retains Allan for Hermione’s bodyguard. She is determined to think the worst of Allan, until someone is out to get rid of him and the true heir of the castle comes into question.

A Duplicitous Façade by Tamela Hancock Murray
England 1812 - In obedience to her father, Melodia agrees to marry a man she has never met. But when a masquerade ball is held to celebrate the marriage, Melodia suspects she has more enemies than friends.

Love’s Unmasking by Bonnie Blythe
England 1814 - Matthew is certain a godly girl does not exist among London’s money-grubbing debutantes. He imitates a fop at society functions to repel them, but his own ruse traps him in an engagement.

English Tea and Bagpipes by Pamela Griffin
Scotland 1822 – When Fiona’s sister and Alex’s brother run off to marry, the families oppose the match between a poor highlander and an English nobleman. Fiona impulsively goes after her sister, and Alex follows.

A Treasure Worth Keeping by Kelly Eileen Hake
England 1832 - Paige is thrilled to hear her father has been hired to restore one of the country’s largest collections of antique volumes—until she learns the mysterious earl is hosting a house party during their stay.

Apple of His Eye by Gail Gaymer Martin
England 1851 - Sarah is curious and independent for a young woman of her day, which leads her to fall in love with a man who would never be invited into the family manor as a guest.

Moonlight Masquerade by Pamela Griffin
England 1865 - Letitia, a unassuming lady’s companion to her cousin, quickly finds herself the possessor of incriminating information and the focus of attention from two mysterious men.

PAMELA GRIFFIN is a multi-award-winning author who fully gave her life to Christ after a rebellious young adulthood. She owes that she’s still alive today to an all-loving and forgiving God and a mother who steadfastly prayed that He would bring her wayward daughter “home.” Pamela’s main goal in writing Christian romance is to help and encourage those who do know the Lord and to plant a seed of hope in them who don’t. She loves to hear from her readers and can be reached at words_of_honey@juno.com.

KELLY EILEEN HAKE lives in LA with the kitten she and her then-boyfriend, Jeff, rescued from a very tall tree. Semi, whose white fur, black spot between his ears, and black tail makes him a walking semicolon, is the grammar cat Kelly never knew she needed. She’s decided the cat and the boyfriend are both keepers and is currently planning a wedding with her new fiancé!

GAIL GAYMER MARTIN, bestselling and award-winning author, has been blessed with 85 published novels and five million books in print. CBS local news listed Gail as one of the four best writers in the Detroit area. She is the author of “Writing the Christian Romance” published by Writer’s Digest. Gail is a founder of American Christian Fiction Writers and a member of numerous other professional writing and speaking organizations. In her earlier professional career, Gail was a teacher of English, literature, and public speaking at high school and university levels. She still enjoys teaching workshops at conferences across the US. She lives in Sedona, Arizona with her husband, Bob, and is active in her church both as a writer and in the music program where she sings in the choir and is a soloist. Visit her website at www.gailgaymermartin.com.

Tamela Hancock Murray is a bestselling author of both fiction and nonfiction whose work was honored with an Inspirational Reader's Choice Award from RWA. Tamela and her husband of 35 years are empty nesters who live in Virginia and love being the parents of two lovely daughters. Tamela enjoys time with her extended family, traveling, reading, and appreciating her readers! Please find Tamela on Facebook, where she is probably the only Tamela Hancock Murray, and on Twitter @Tamela_Murray.

JILL STENGL is the author of numerous romance novels including Inspirational Reader’s Choice Award- and Carol Award-winning Faithful Traitor. She currently lives with her husband and two spoiled cats near Raleigh, North Carolina. Her interests include drinking huge mugs of root-beer rooibos tea, spoiling her grandchildren, and indie-publishing sweet fairy-tale retellings. Visit her website at www.jmstengl.com to see her current writing projects.