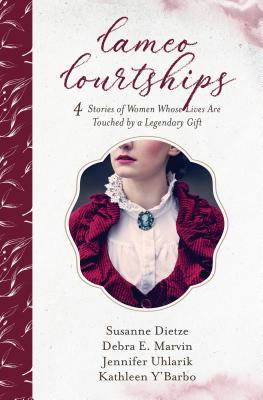 A Family Heirloom Inspires Romance
In 1851, a special cameo is gifted by Queen Victoria to Letitia Newton, who though considered an old maid, meets the perfect gentleman minutes after donning. Told by the Queen the cameo is to be shared, Letitia gifts the "Victoria Cameo" to a woman in her family, hoping adventure and romance will follow each of its subsequent wearers.

PINNED ABOVE HER HEART by Susanne Dietze
1851 – Pittsburgh, PA
After receiving the Victoria Cameo, aspiring journalist Clara Newton works to expose a smuggler, but reporter Byron Breaux must break the story first or lose his job. Working together is out of the question until they learn secrets that threaten Clara’s father. . .and her heart.

TAMING PETRA by Jennifer Uhlarik
1875 – Colorado Territory
Trouser-wearing frontierswoman Petra Jayne Hollingsworth has no intention of donning the heirloom cameo, but when a crooked brothel owner steals the treasure, securing its return becomes Petra’s highest priority. Assisting her, Reverend Dustin Owens is appalled to learn the price of its ransom is that Petra must work in the brothel. He may save the woman’s virtue, but can he help Petra regain her cameo and rediscover her faith?

MEET ME AT THE FAIR by Kathleen Y’Barbo
Spring 1885 – New Orleans during the 1884 World’s Fair and Cotton Exposition
It takes a Pinkerton to find a Pinkerton, and Ethan Butler has been charged with finding Elizabeth Newton. Just when he locates her, the cameo he is to deliver is stolen. It appears his previous case has discovered his presence in New Orleans, but he can’t return to that case until the cameo is found. With Miss Newton as a reluctant partner in crime fighting, can Ethan Butler locate the cameo and its thieves without losing his heart?

LENDING MY HEART by Debra E. Marvin
1895 – Pittsburgh, PA
The arrival of a handsome Scottish administrator ruins Miss Bertie Hart’s dream to oversee the new Carnegie Library children’s department. Yet bristly Mr. Russell Smart’s working-class determination and his love of books make him the perfect partner to better the lives of Pittsburgh’s poor. As for a partner in life? Not even her Victoria Cameo can narrow the social chasm he and her father keep between them.

Susanne Dietze began writing love stories in high school, casting her friends in the starring roles. Today, she's the award-winning author of a dozen new and upcoming historical romances who's seen her work on the ECPA and Publisher's Weekly Bestseller Lists for Inspirational Fiction. Married to a pastor and the mom of two, Susanne lives in California and enjoys fancy-schmancy tea parties, the beach, and curling up on the couch with a costume drama and a plate of nachos.  You can visit her online at www.susannedietze.com and subscribe to her newsletters at http://eepurl.com/bieza5.

DEBRA E. MARVIN tries not to run too far from real life, but the imagination born out of being an only child has a powerful draw. Besides, the voices in her head tend to agree with all the sensible things she says. She is a member of American Christian Fiction Writers, Sisters in Crime, and serves on the board of Bridges Ministry in Seneca Falls, New York. She is published with Barbour Publishing, WhiteFire Publishing, Forget Me Not Romances, and Journey Fiction, and has been a judge for the Grace Awards for many years. Debra works as a program assistant at Cornell University and enjoys her family and grandchildren, obsessively buying fabric, watching British programming, and traveling with her childhood friends.  http://debraemarvin.com/

Jennifer Uhlarik discovered the western genre as a preteen, when she swiped the only “horse” book she found on her older brother’s bookshelf. A new love was born. Across the next ten years, she devoured Louis L’Amour westerns and fell in love with the genre. In college at the University of Tampa, she began penning her own story of the Old West. Armed with a BA in writing, she has won five writing competitions and was a finalist in two others. In addition to writing, she has held jobs as a private business owner, a schoolteacher, a marketing director, and her favorite—a full-time homemaker. Jennifer is active in American Christian Fiction Writers and is a lifetime member of the Florida Writers Association. She lives near Tampa, Florida, with her husband, teenage son, and four fur children.

Bestselling author Kathleen Y’Barbo is a multiple Carol Award and RITA nominee of more than eighty novels with almost two million copies in print in the US and abroad. She has been nominated for a Career Achievement Award as well a Reader’s Choice Award and is the winner of the 2014 Inspirational Romance of the Year by Romantic Times magazine. Kathleen is a paralegal, a proud military wife, and a tenth-generation Texan, who recently moved back to cheer on her beloved Texas Aggies. Connect with her through social media at www.kathleenybarbo.com.
or
Buy Here
Copyright © 2020 American Booksellers Association