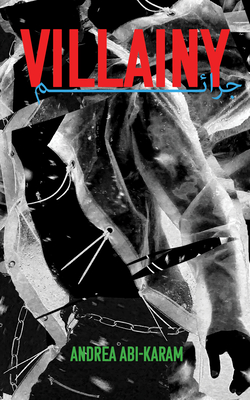 Andrea Abi-Karam answers the call to action for poetry itself to become the radical accomplice it was destined to be in their second book, Villainy. In order to live through the grief of the Ghostship Fire & the Muslim Ban, Villainy foments political action in public spaces, and indexes the various emotional states, such as rage, revelry, fear, grief, and desire to which queers must tend during protest. In scenes loaded with glitter, broken glass, and cum, Abi-Karam insists that in order to shatter the rising influence of new fascism we must embrace the collective work of antifascists, street medics, and queer exhibitionists and that the safety that we risk is reckless and necessary. Disruptive and demanding, these punk poems embody direct action and invite the audience into the desire-filled slippage between public sex and demonstration. At heart, Villainy aims to destroy all levels of hierarchy to establish a participatory, temporary autonomous zone in which the targeted other can thrive.

Andrea Abi-Karam is an arab-american genderqueer punk poet-performer cyborg, writing on the art of killing bros, the intricacies of cyborg bodies, trauma and delayed healing. Selected by Bhanu Khapil, Andrea's debut EXTRATRANSMISSION (Kelsey Street Press, 2019), is a poetic critique of the U.S. military's role in the War on Terror. Simone White selected their second assemblage, Villainy for publication in Fall 2021 at Nightboat Books. With Kay Gabriel, they co-edited We Want It All: An Anthology of Radical Trans Poetics released by Nightboat Books in November 2020. They are a Leo currently obsessed with queer terror and convertibles.
Loading...
or support indie stores by buying on