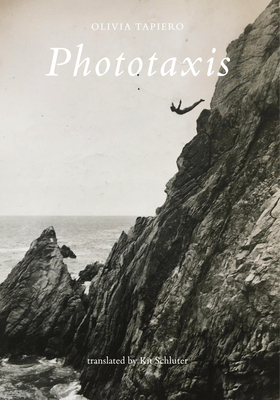 Translated from the French, Phototaxis is a fragmentary, darkly-humorous, and apocalyptic novel from a leading young voice from Montreal from Montreal centered around questions of friendship, the commodification of globalized tragedy, ecological crisis, the griefs of migration, and the possibility of political coherence in today's world.

In a city mysteriously overflowing with meat, a museum is bombed, a classical piano player hooked on snuff films throws himself off a building, a charismatic but misled political organizer has disappeared, and a young immigrant navigates a crumbling continent. In the fallout of their friendship, Olivia Tapiero's Phototaxis deploys a fugal language at turns surreal, scathingly comic, poetic, and revolutionary to dismantle our world and construct one even closer to its breaking point, or further along in its breaking. Here, voice and event surge up like reflux from the exhausted throats of nature and urban spaces, sounding out an architecture of failure within a suspiciously steady rise of fascism and its persistent counterpoints. A dystopic work of hope that carries its own disintegration, Phototaxis (translated by Kit Schluter) is Tapiero's first novel to appear English.