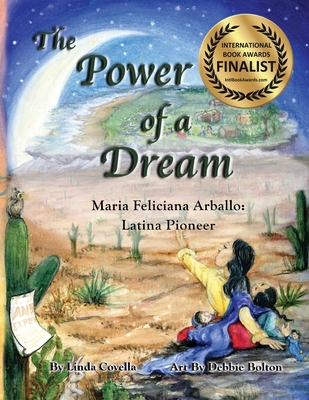 The Power of a Dream

The Power of a Dream tells of a little-known part of U.S. history when, in 1775, some of the first Spanish settlers embarked on a colonization expedition from Mexico to California led by Captain Juan Bautista de Anza. One of the colonists was Maria Feliciana Arballo, a young widow who made the arduous four-month journey with her daughters: the infant Estaquia and four-year-old Tom sa. Feliciana was an inspiring, brave, and remarkable woman, especially for the time in which she lived. She loved music and dancing, and she helped distract the colonists from the hardships they faced.
She later remarried and had eight more children, who became part of her legacy: many of them played important roles in the history of California as discussed at the end of the book. As many immigrants do today, Feliciana had a dream for a better life for herself and her children. And the power of that dream carried her through difficult times to a new beginning in a new land, the promise of California.