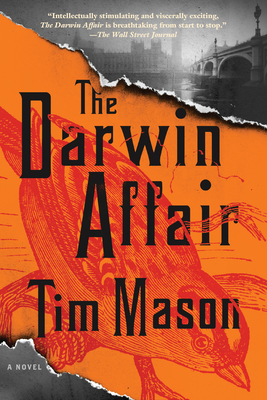 Get ready for one of the most inventive and entertaining novels of 2019—an edge-of-your-seat Victorian-era thriller, where the controversial publication On the Origin of Species sets off a string of unspeakable crimes.

London, June 1860: When an assassination attempt is made on Queen Victoria, and a petty thief is gruesomely murdered moments later—and only a block away—Chief Detective Inspector Charles Field quickly surmises that the crimes are connected. Was Victoria really the assassin’s target? Or were both crimes part of an even more sinister plot?

Field’s investigation soon exposes a shocking conspiracy: the publication of Charles Darwin’s controversial On the Origin of Species has set off a string of terrible crimes—murder, arson, kidnapping. Witnesses describe a shadowy figure with lifeless, coal-black eyes. As the investigation takes Field from the dangerous alleyways of London to the hallowed halls of Oxford, the list of possible conspirators grows, and the body count escalates. And as he edges closer to the dastardly madman called the Chorister, he uncovers dark secrets that were meant to remain forever hidden.


Praise For The Darwin Affair: A Novel…

“London in 1860 is the principal setting of Tim Mason’s The Darwin Affair, which evokes the pleasures of such period authors as Wilkie Collins, Arthur Conan Doyle and Charles Dickens. [A] memorable page-turner. Intellectually stimulating and viscerally exciting, The Darwin Affair is breathtaking from start to stop.”
—The Wall Street Journal

“A perfect addition to your summer reading list. Fast-paced and lively, this page-turner would appeal to fans of Charles Dickens and Sir Arthur Conan Doyle.”
—Reader’s Digest

“Readers of historical fiction, murder mysteries, action/adventure and thrillers will be equally entertained and perhaps edified: beneath the excitement lie thought-provoking questions about class and order, the interplay of science and religion and intellectual curiosity. The Darwin Affair has it all: thrills, engrossing characters, taut pacing and historical interest.”
—Shelf Awareness

“While readers cheer for Inspector Field, a true-life detective and friend of Charles Dickens, they will inadvertently learn a smattering of history—and enjoy every second of it. Author Tim Mason makes it fun. He writes with authenticity and knows precisely how to keep his audience on the edge of their seats. Oh, and just when you believe he’s about to wrap it up, get comfortable, because he has a whole lot more action in store.”
—Bookreporter.com

“With many grisly murders and many shocking surprises along the way, the book rockets toward a last dark twist. Careful research, a driving plot, wry wit, and compelling characters make this a most entertaining read.”
—Kirkus Reviews

“Set in Victorian era London, Tim Mason’s The Darwin Affair is a fantastic and original historical thriller. In fact, this is one of the best thrillers I’ve read in years.”
—The Missourian

“The Darwin Affair by Tim Mason . . . set in Victorian England of the 1860s . . . grabs the reader and tosses him or her into the middle of an assassination attempt of the Royals—Queen Victoria and Prince Albert . . . [T]he plot unfolds in an exciting dash to save Prince Albert, and bring Decimus Cobb . . . easily the most frightening antagonist since Hannibal Lecter . . . to justice.”
—New York Journal of Books

“This clever, yeasty detective yarn is like a runaway hansom cab that pauses just long enough to take on passengers ranging from Darwin to Dickens before hurtling onward. It's a grand ride, a serious education and a delightful addiction.”
—Louis Bayard, author of Courting Mr. Lincoln

“It’s London 1860, and an assassination attempt has been made on Queen Vict

Tim Mason is a playwright whose work has enjoyed numerous productions in New York City and throughout the world for decades. Among the awards he has received are a Kennedy Center Award, the Hollywood Drama-Logue Award, a fellowship from the National Endowment for the Arts, and a Rockefeller Foundation grant. In addition to his dramatic plays, he wrote the book for Dr. Seuss’s How the Grinch Stole Christmas! The Musical, which had two seasons on Broadway and tours nationally every year. He is the author of one young adult novel, The Last Synapsid, published in 2009. The Darwin Affair is his first adult novel.
Loading...
or
Not Currently Available for Direct Purchase