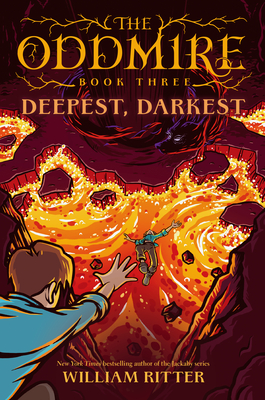 The third adventure in the beloved fantasy series full of folklore and mayhem, from the creator of Jackaby.

Brothers Cole and Tinn are determined to solve a mystery almost as old as they are: What happened to their long-missing father?

Joseph Burton vanished without a trace, leaving the babies’ mother to raise them—one human, one a goblin changeling—alone. Some say Joseph abandoned his family, others that he met foul play looking for a way to get rid of the changeling imposter. Cole is determined to learn his father’s true fate, so he and Tinn set out on a dangerous quest to the deepest, most deadly limits of the Oddmire—with the help of Evie, expert on the creatures of the Wild Wood, and Fable, the indomitable half human, half fairy.

Meanwhile a shudder runs through the forest. Increasingly powerful earthquakes shake the land, sinkholes form, and the spriggans, trolls, and other creatures along their path speak of an ancient evil on the rise . . .

In the third book of the Oddmire series, New York Times bestselling author William Ritter takes readers on an unforgettable journey of family, fate, and a dangerous, magical forest.

“In a lovely, successful inversion of expectation, the boys and their friends bring protective adult family along on their dangerous adventure . . . Cinematic adventure and hope amid darkness, flavored with silliness: a winner.”
—Kirkus Reviews, starred review

“Populated by a variety of folkloric beings such as spriggans, elves, nymphs, goblins, kobbolds, and fairies, along with a few humans, Ritter’s fantasy offers plenty of playful interest as a world of its own. Black-and-white spot illustrations enhance the immersive qualities of setting and action.”
—The Horn Book Magazine

Praise for The Oddmire, Book 2: The Unready Queen
"The Oddmire series' memorable, inspiring characters are full of heart and, combined with the enchanting magic surrounding them, form the strong core of a burgeoning fantasy classic."
—Booklist, starred review

“In another brilliantly written visit to Oddmire, Ritter returns to an already magical place filled with danger and intrigue, and adds a new chapter to an outstanding series. VERDICT Those who loved book one will adore book two. A wonderful addition to the series and to young fantasy collections.”
—School Library Journal, starred review

"Ritter deftly executes the all-too-timely theme of racist demagoguery—and profiting from it—in a way that is realistic yet hopeful. He also leavens it with humor: Fable, particularly, is a reliable source of silliness and fart jokes . . . Captivating adventure, magical friendship, and just the right amount of goofiness."
--Kirkus Reviews

William Ritter is an Oregon author and educator. He is the proud father of the two bravest boys in the Wild Wood, and husband to the indomitable Queen of the Deep Dark.The Oddmireis Ritter’s first series for middle-grade readers. He is also the author of the New York Times bestselling, award-winning Jackaby series for young adult readers. Visit him online at rwillritter.wordpress.com and find him on Twitter: @Willothewords.