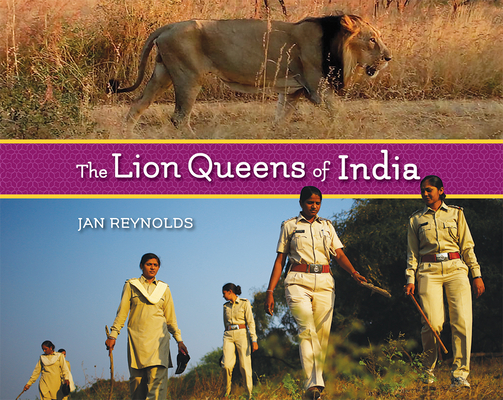 The Lion Queens of India

Award-winning photojournalist Jan Reynolds offers readers a fascinating glimpse into the world of the endangered Asiatic lions and the female forest rangers who fight to save them.

In the far west of India, in Gir National Park, dwells one of the rarest big cats on Earth: the Asiatic lion. Known for its distinctive belly flap and the bushy tassels on its tail, the Asiatic lion once roamed from the Mediterranean Sea to the Bay of Bengal. But human hunting and expansion into their territory eroded the lions' numbers, until only twelve remained alive.

Now more than six hundred lions stalk the forest and savannahs of Gir -- thanks in part to the work of the Lion Queens, a team of female rangers who specialize in caring for the Asiatic lions. Join Rashila and her friends on a journey around the park as they visit the lions in their habitats, monitor the web of life that encompasses all of the animals, and work with local villagers to preserve harmony between the human and animal populations. Readers will discover not only the many factors that influence the lions' lives, but what they can do to help ensure the lions' survival. Illustrated throughout with compelling photographs, The Lion Queens of India is an inspiring portrait of the lives of these female rangers and animal conservation efforts across the world.

Jan Reynolds is an award-winning author and photographer whose work has appeared in numerous publications, including National Geographic, The New York Times, and Outside magazine. All seven books in her Vanishing Cultures series of photo-essays for children were recognized as Notable Social Studies Trade Books for Young People, and she is also the author of Celebrate! Connections Among Cultures; Cycle of Rice, Cycle of Life; and Only the Mountains Do Not Move. Reynolds holds the world record for women's high altitude skiing, was part of the first expedition to circumnavigate Mount Everest, and performed a solo crossing of the Himalayas. She lives with her family in Stowe, Vermont. Please visit her on the web at janreynolds.com.
Loading...
or support indie stores by buying on