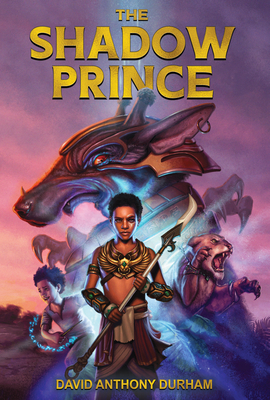 In this middle grade solarpunk novel set in an alternate Egyptian universe, twelve-year-old Ash must compete and survive to become the shadow--and protector--of the prince.

Growing up in a village in the middle of the desert, Ash thinks his future holds nothing but sand, sun, a few annoying bullies, and lots of boring chores. Boy, is he wrong

On the night before his twelfth birthday, Ash learns that he was born on the same day as Prince Khufu, which makes him eligible to compete to be the prince's shadow, a coveted position as the friend and bodyguard of the boy destined to be pharaoh of all of Egypt. At first, Ash can't believe it, but when a floating royal barge takes Ash and his mentor to the bustling, magical, solar-powered capital, things get real.

What awaits Ash and the candidates is deadly--five days of dangerous tests filled with demon fighting, monster slaying, and magical spells--each overseen by a different Egyptian god. Ash finds two friends willing to fight by his side--the first friends he's ever made. But there are candidates who will lie, cheat, and even harm others to win. Not all will survive, and only one can become the prince's shadow.

To make matters worse, Ash is up against Lord Set, the devious god of chaos, who is secretly working to make the candidates fail. But if they do, the very survival of the kingdom is in peril. Can Ash and his new friends save Egypt? And will any of them survive to become the shadow prince?

David Anthony Durham was born in New York to a Caribbean family and raised primarily in the Mid- Atlantic area. He holds an MFA in creative writing from the University of Maryland, and teaches at the Stonecoast MFA Program and the University of Nevada, Reno. David is the author of seven books for grown-ups. The Shadow Prince is is his first book for middle-grade readers.
Loading...
or support indie stores by buying on