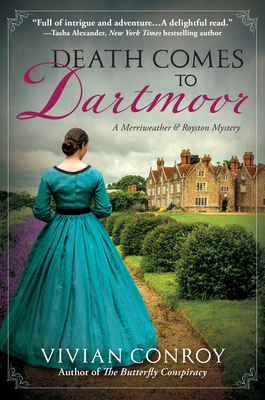 A Merriweather and Royston Mystery

The mist-shrouded moors of Devon proffer a trove of delights for two vacationing zoologists—but also conceal a hoard of dark secrets reaching down to the fathomless depths of the ocean.

Miss Merula Merriweather barely saved her uncle from the gallows after he was wrongly accused of murder—and now, she’s left the bustle of Victorian London to recuperate in the fresh air of Dartmoor with her fellow zoologist, Lord Raven Royston. The trip offers a unique treat, as they’ll be staying with a friend of Raven’s, who owns a collection of rare zoological specimens—including a kraken, a sea monster of myth and legend.

But all is not right in the land of tors, heaths, and mist. Their host’s maid has vanished without a trace, and the townspeople hold him responsible, claiming that his specimens are alive and roam the moors at night, bringing death to anyone who crosses their path. Merula and Raven are skeptical—but the accusations become more ominous when they find several specimen jars empty.

As the two hunt for clues across a desolate and beautiful landscape, a stranger appears bearing a shadowy secret from Merula’s past. Could there be a connection between her family history, the missing girl, and a fearsome monster that could be on the loose? The race is on to find the truth.

Having spent many afternoons as a teen on the Nile with Poirot or confronting sinister spinsters in sleepy English towns with Miss Marple, it was only natural Vivian Conroy would start writing mysteries of her own. Atmospheric descriptions, well developed characters and clever plotting made several of her cozy mysteries #1 Amazon US and Canada bestsellers in multiple categories. Her new Victorian mystery series features a female zoologist, allowing Vivian to share her fascination with natural history, a field where in the Victorian age costly deceit, questionable experiments and extraordinary theories offer great inspiration for a mystery writer’s fertile imagination. Besides writing, Vivian enjoys hiking, collecting stationery and trying new desserts, especially if chocolate is involved.

Praise For Death Comes to Dartmoor: A Merriweather and Royston Mystery…

Praise for The Butterfly Conspiracy:
“Conroy elevates the common Victorian damsel-in-distress setup to a higher level, with intelligent characters, vivid bits of history, and a plot that, while predictable, is light and pleasurable.”
—Kirkus Reviews

“A promising start to the Merriweather & Royston series, which effectively combines a cozy feel with a natural-history frame.”
—Booklist

“The idea at the story’s core—death by butterfly—is fascinating from start to finish.”
—NY Journal of Books

"The Butterfly Conspiracy has everything a reader could want, great characters, a smart heroine and most of all a compelling plot that will keep you turning the pages.”—Emily Brightwell, New York Times bestselling author