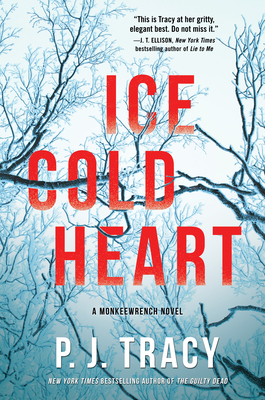 It's a bitter winter in Minnesota--too cold to kill. There hasn't been a murder for a month, but the lull quickly comes to an end for Detectives Leo Magozzi and Gino Rolseth, when they're called to the gruesome homicide of Kelly Ramage. Found in a friend's vacant house, this was no random attack, and clues reveal that she was living a very dangerous secret life.

Magozzi and Gino trace her steps back to an art gallery where she was last seen alive. The gallery seems like a dead end, but the art is disturbing and exploitative. It may very well be inspiring a sadistic killer, because in this instance, art doesn't imitate life, it imitates death.

Tipped off about a year-old murder that is a mirror-image of Kelly's crime scene, Gino and Magozzi enlist the aid of Grace MacBride and her eccentric, tech genius partners in Monkeewrench Software to help them decipher the digital trail that might connect the cases.

As coincidences emerge, Magozzi, Gino, and the team have to work around the clock at breakneck pace to unravel a series of clues that form the framework of a larger, more sweeping, and insidious conspiracy than any of them could have imagined. Is Kelly the last person to die or just the most recent? And is there any way to stop it?

"The series might have reached double digits, but it’s showing no signs of falling into a rut. More, please."
—Booklist

“You’ll be hooked until the last page."
—BookReporter

"It all comes together in a thrilling and satisfying confrontation...As compelling and fresh as the first."
—Kings River Life

"Traci has produced another page-turner in Ice Cold Heart...An author to keep around!"
—Tulsa Book Review

Praise for the Monkeewrench series:

"The seriesmight have reached double digits, but it’s showing no signs of falling into a rut. More, please."
—Booklist on Ice Cold Heart

"Interesting and fast-moving...Ice Cold Heart is sure to give you chills as the suspense ramps up, no matter the season."
—BookTrib on Ice Cold Heart

“You’ll be hooked until the last page."
—BookReporter on Ice Cold Heart

"A killer read in every way...Thriller fans will go ape."
—People (Critic's Choice) on Monkeewrench

"An engrossing read. Those who haven’t found the pleasure of stories involving the Monkeewrench gang can easily jump-start."
—AP News

"A suspenseful fast-paced story you can't wait to finish....Once you begin, you won't stop until the last page, it's that compelling."
—Catherine Coulter, New York Times bestselling author of the FBI Thrillers on The Guilty Dead

"The stakes are higher, and nothing is as it seems. This is Tracy at her gritty, elegant best. Do not miss it."
—J. T. Ellison, New York Times bestselling author of Lie to Me

"I have been a fan of P. J. Tracy’s Monkeewrench series from the first book. Dark, twisty, suspenseful—everything I love in a mystery."
—Allison Brennan, New York Times bestselling author of the Lucy Kincaid series

"The banter is witty, the characters quirky, the plot action-packed."
—Minneapolis Star Tribune, Summer Reads Pick on Nothing Stays Buried

P. J. Tracy was the pseudonym of mother-daughter writing team P. J. and Traci Lambrecht. Traci spent most of her childhood riding and showing horses. She graduated with a Russian Studies major from St. Olaf College in Northfield, Minnesota, where she also studied voice. Her aspirations of becoming a spy were dashed when the Cold War ended, so she began writing to finance her annoying habits of travel and singing in rock bands. Much to her mother's relief, she finally realized that the written word was her true calling. They had a long, prolific career together in multiple genres before P. J.'s passing in December 2016. Traci continues to write.
Loading...
or
Not Currently Available for Direct Purchase