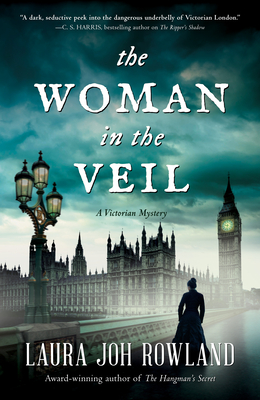 The Woman in the Veil (Hardcover)

Award-winning author Laura Joh Rowland is back with the fourth in her critically acclaimed Victorian mysteries where the case of a mutilated "Sleeping Beauty" washes ashore in London.

Sarah Bain and her friends Lord Hugh Staunton and Mick O'Reilly are crime scene photographers for the Daily World newspaper. After solving a sensational murder, they're under pressure to deliver another big story. On a foggy summer night, they're called to the bank of the river Thames. The murder victim is an unidentified woman whose face has been slashed. But as Sarah takes photographs, she discovers that the woman is still alive.

The case of "Sleeping Beauty" becomes a public sensation, and three parties quickly come forward to identify her: a rich, sinister artist who claims she's his wife; a mother and her two daughters who co-own a nursing home and claim she's their stepdaughter/sister; and a precocious little girl who claims Sleeping Beauty is her mother. Which party is Sleeping Beauty's rightful kin? Is someone among them her would-be killer?

Then Sleeping Beauty awakens--with a severe case of amnesia. She's forgotten her name and everything else about herself. But she recognizes one of the people who've claimed her. Sarah is delighted to reunite a family and send Sleeping Beauty home--until one of the claimants is murdered. Suddenly, Sarah, her motley crew of friends, and her fiancé Detective Sergeant Barrett are on the wrong side of the law. Now they must identify the killer before they find themselves headed for the gallows.

Laura Joh Rowland is the award-winning author of the samurai detective Sano Ichiro mystery series set in 17th century Japan, as well as a historical suspense series starring Charlotte Bronte. Her work has been published in 21 countries; nominated for the Anthony Award, the Hammett Prize, and the Barnes & Noble Discover Great New Writers Award; won RT Magazine's Reader's Choice Award; and been included in the Wall Street Journal's list of the five best historical mystery novels. Laura holds a Bachelor of Science and a Master of Public Health degree from the University of Michigan. She is a former aerospace scientist, a painter, and a cartoonist. She lives in New York City with her husband Marty. This is her fourth Victorian mystery.

Praise For The Woman in the Veil: A Victorian Mystery…

Praise for The Woman in the Veil:
"Strong in character and plot, Rowland's fourth Victorian mystery consistently appeals."
—Kirkus Reviews

"[The Woman in the Veil] should build interest in Rowland's richly atmospheric Victorian mysteries."
—Booklist

"Impressively elegant and well crafted...A compelling and compulsive page turner of a read from cover to cover."
—Midwest Book Review

"An appealing trio of crime solvers...The author's knowledge and understanding of the Victorian age are flawless as she brings this mystery to an exciting conclusion."
—Historical Novels Review
or
Buy Here
Copyright © 2020 American Booksellers Association