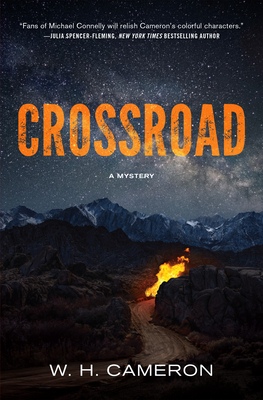 On a desolate road in the Oregon high desert, an apprentice mortician stumbles upon a horrific car crash--and into a vortex of treachery, long-buried secrets, and growing menace.

Melisende Dulac is a fish out of water after relocating from the East Coast to a small community in the Oregon high desert. But just as she's beginning to think of Barlow County as home, her life takes an ominous turn when she comes upon a grisly multiple car wreck and three shattered bodies on an isolated road outside of town. Near the scene, Melisende trips over a fourth body, that of a newborn girl lying a physics-defying distance from the wreckage. There is no one to claim the infant, nor a clear indication she was even part of the accident.

The crash offers plenty of opportunities for an apprentice mortician--but when the victims' bodies are stolen from her family's mortuary, Melisende is branded suspect number one. Then, Portland lawyer Kendrick Pride arrives on the scene on behalf of one of the victim's families--or so he says--and Melisende begins to see that there's much more to this enigmatic figure than meets the eye.

As the shadows gather and the mystery deepens, Melisende must race to find the truth--or be swallowed by the darkness.

Praise For Crossroad: A Novel…

Praise for Crossroad:
"Cameron keeps the surprises coming. This pulse-pounding tale begs to be read in one sitting."
—Publishers Weekly

“A stellar foundation...Crossroad is marked by dark humor, grace and seeds of connections that hopefully signal a path to more Melisende Dulac.”
—Shelf Awareness

"Crossroad offers up twist after delicious twist. Readers will root for the prickly and exceedingly relatable mortician-in-training Melisende Dulac."
—Tiffany Quay Tyson, author of The Past is Never and Three Rivers

"Gripping and darkly comic...Packed with unusual and enthralling characters, and set in a wonderful, fully-realized, high desert milieu, Crossroad had me hooked from page one."
—Owen Laukkanen, author of The Forgotten Girls and The Watcher in the Wall

"Cameron deploys cliffhangers with a master’s touch, and renders his fictional Barlow County so vividly, you can almost smell the desert sage...He and I will be returning for years to come."
—Chris Holm, Anthony Award winning author of The Killing Kind

"A richly drawn background contextualizes the mystery's melancholy, with bursts of humor emerging like sun through clouds."
—Kirkus Reviews

When he's not tending his chickens, W. H. Cameron shapes unruly words into captivating people caught in harrowing situations. As Bill Cameron he's the author of the critically-acclaimed Skin Kadash mysteries. His stories have appeared in Alfred Hitchcock's Mystery Magazine, Portland Noir, Lee Child's First Thrills anthology, and more. His work has been nominated for the Left Coast Crime Rocky Award, the CWA Short Story Dagger, and multiple times for the Spotted Owl, which he won for County Line. His YA mystery Property of the State was named one of Kirkus Reviews Best Books of 2016: Teen.
Loading...
or support indie stores by buying on