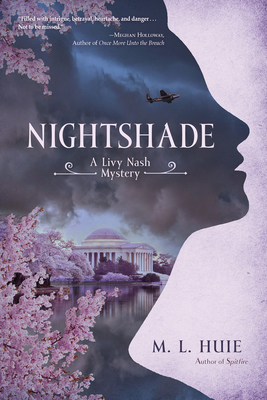 How far would you go to rescue a friend?

British spy Livy Nash has never had many friends. But fellow agent Margot Dupont was the exception to the rule. At least, until she disappeared during one of their missions in World War Two, never to be heard from again. Since then, Livy's made do. Some people, you just can't replace.

But when the British pick up Margot's call sign--NIGHTSHADE--years after the war, Livy can't help the glimmer of hope that she might see her old friend again. But Livy has her doubts: what their enemies are using it to lure out Livy and her team? What if it's all a trick?

Despite her unease, Livy dives headlong into finding Margot, aided by her boss, the charming Ian Fleming. When evidence arises that a handsome Russian spy might have information about Margot, Livy agrees to her most dangerous mission yet: going undercover as a double agent to spy on the infamous "Red Devil".

As Livy is pulled deeper into the shadows of treachery, the possibility of finding Margot alive diminishes as the danger grows. How much will she have to sacrifice to find a friend she thought she'd lost forever?

Praise for Nightshade:
“Plenty of spycraft and nonstop action, with a shocking ending that points to future adventures.”
—Kirkus Reviews

“Livy faces brutality, betrayal, double-crosses, and worse as she takes advantage of there being little honor among spies. Huie does a masterly job.”
—Publishers Weekly

“A solid follow-up...Livy Nash is a strong, well-written female character that you will root for.”
—Red Carpet Crash

Praise for Spitfire:
"An old-fashioned mystery shot through with tragedy; for aficionados of the glamour and romance of spycraft."
—Kirkus Reviews

"This debut is more emotional than Fleming's own Bond novels...Nash is a welcome new protagonist who will be welcomed by fans of Kate Atkinson's Transcription (2018) and Simon Mawer's Tightrope (2015)."
—Booklist

"Huie writes with dry, cracking wit and unflinching heart."
—Meghan Holloway, author of Once More Unto the Breach

"A twisting story of intrigue and betrayal . . . Livy Nash is exactly my kind of heroine."
—Julia Kelly, author of The Light Over London

"Meticulously researched with a twisty, compelling plot and a heroine that you root for from the first page, Spitfire combines all the elements of great historical fiction, I thoroughly enjoyed this story!”
—Jane Healey, author of The Beantown Girls

M. L. Huie is a writer, teacher and actor. In addition to working ten years as a features journalist he has written several plays that have been performed throughout the US and in the UK. Like Livy Nash he loves the northwest of England and has a Yank's appreciation for a good Lancashire Hot Pot.
Loading...
or
Not Currently Available for Direct Purchase