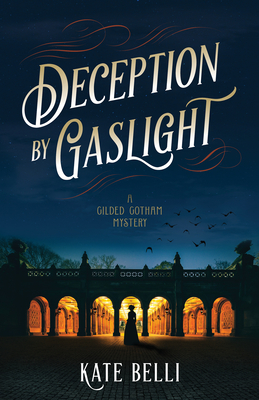 As a chill sets in on New York City in the winter of 1888, a jewel thief dubbed the "Robin Hood of the Lower East Side" has been stealing from the city's wealthiest and giving to the poor. Genevieve Stewart--a young woman whose family is part of Mrs. Astor's famed 400 but who has forged a life of her own as a reporter--decides to chase the story, but gets more than she bargained for: a murder victim sprawled in a dark alley in the dangerous Five Points neighborhood.

A handsome neighborhood tough comes to her rescue--but when she encounters the same man at a glamorous ball a few nights later, she realizes he's society scion Daniel McCaffrey. Could this be her Robin Hood? When two more murders rock the Knickerbocker world, it becomes apparent that something much more sinister is afoot than a few stolen diamond necklaces. Genevieve is determined to prove that Daniel is Robin Hood--but she's loath to believe he is a killer as well. From the glittering lights of Fifth Avenue to the sordid back alleys of Five Points, the truth is just one murder away.

Praise For Deception by Gaslight: A Gilded Gotham Mystery…

Praise for Deception by Gaslight:
“This first in a promising series drops readers right into the dirty, cutthroat streets of a bygone Gotham, introduces a couple whose fortunes they’ll wish to follow, and makes a great recommendation for fans of Mariah Fredericks.”
—Booklist, starred review

“The characters are really well-written and the story and time setting work perfectly.”
—Red Carpet Crash

"Belli's captivating debut is a delicious blend of mystery, romance and historical intrigue. The evocative, Gilded-Age setting and richly-drawn characters make this the kind of book you sink into and don't want to leave. I'm already looking forward to Genevieve and Daniel's next adventure!" —Elizabeth Blackwell, author of Red Mistress and On a Cold Dark Sea

"From Fifth Avenue mansions to back alley pubs, a gutsy female reporter and a rags-to-riches millionaire take on societal intrigue and political double-dealing in this entertaining and romantic tale of Gilded Age New York."
—Alyssa Maxwell, author of the Gilded Newport mysteries

"[A] complex conspiracy, exciting action, and the allure of a contradictory romance makes this debut novel a page-turner."
—Rosemary Simpson, author of the Gilded Age mysteries

Kate Belli lives in the mid-Atlantic region with her husband and son. When not writing, she works as a professor or a yogi, depending on the day. Deception by Gaslight is her first novel.
Loading...
or support indie stores by buying on