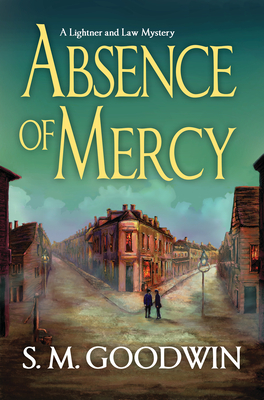 A Lightner and Law Mystery

A string of grisly murders in Pre-Civil War New York propels an unlikely pair of detectives into a deadly tinderbox in S. M. Goodwin's debut novel, a sure hit for fans of Will Thomas and C. S. Harris.

Jasper Lightner is a decorated Crimean War hero and the most admired inspector in London's Metropolitan Police. Along with a chest full of medals, he's got a head injury that's left large chunks of his memory missing. But Jasper's biggest problem is his father, the Duke of Kersey, who, enraged by a series of front-page newspaper stories extolling Jasper's exploits, decides he's had enough of the embarrassment and uses his political connections to keep his son out of the headlines--and off the police force.

Jasper is sent packing to New York City on a year-long assignment to train detectives, and discovers a police department hovering on the brink of armed conflict. Assigned to investigate the murder of philanthropist and reformer Stephen Finch, Jasper joins forces with a man who might be even more of an outsider than he is: Hieronymus Law, a detective who had investigated two almost identical killings--and who is rumored to have taken money to help frame an innocent woman for murder.

Law is bent on restoring his good name. But can Jasper trust Hy enough to bring him into the investigation? As the city devolves into madness and law enforcement falls into the hands of dangerous gangs, this unlikely team has no choice but to work together to pursue an adversary more sinister than either has faced alone.

Praise For Absence of Mercy: A Lightner and Law Mystery…

“Fans of gritty historicals will be eager for more.”
—Publishers Weekly

“This fantastic detective novel has plenty of twists and turns...Eagerly awaiting the next in the series.”
—Midwest Book Review

"With captivating characters, luscious writing and intrigue around every corner, S.M. Goodwin's debut historical mystery is destined to be among the most talked about of the year. Rich. Resonant. Enigmatic. Just a fantastic, fantastic read!"  —Darynda Jones, New York Times bestselling author of the Charley Davidson series

“S.M. Goodwin serves up the perfect historical mystery brew; a captivating sleuth, a diabolical plot, and a vivid sense of place and time. Satisfying yet highly addictive!”
—Dianne Freeman, award-winning author of the Countess of Harleigh mystery series

“Well-drawn characters and a gruesome plot make this a series debut that will appeal to hardened mystery fans.”
—Tessa Harris, award-winning author of the Dr. Thomas Silkstone mysteries

“S.M. Goodwin spins a dark, suspenseful tale that vividly captures the world of pre-Civil War New York City...This is a fabulous launch to what is sure to be a long-running series!"
—Edwin Hill, Edgar and Agatha-nominated author of Watch Her

“An achingly realistic mystery...S.M. Goodwin knows how to make history come alive on pages that you just want to keep turning!”
—Carol Potenza, award-winning author of Hearts of the Missing

S. M. Goodwin has worked as a bartender, college history professor, and criminal prosecutor. S.M. currently lives at 8,000 feet elevation in the Sangre de Cristo Mountains with a whole bunch of dogs, chickens, geese, ducks, and other critters. Absence of Mercy is S.M.'s first historical mystery novel.
Loading...
or support indie stores by buying on