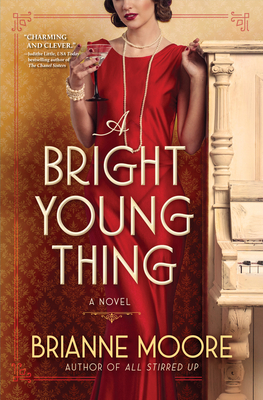 In early 1930s England, a young firebrand finds herself on a fraught and dangerous road to independence.

In 1931 England, Astra Davies defies all the conventions. Clever, witty, and determined, Astra smokes, drinks, plays a mean piano, and gallivants around London with her beloved Cavalier King Charles Spaniel. But Astra finds herself in a tight spot when her parents die suddenly, leaving her with a raft of debts. With few marketable skills and a closet full of family secrets, Astra has two choices: find a rich husband or make her own way.

A fiercely driven woman like Astra is not about to cast her lot in with a man, especially out of desperation. And since the only man she fancies--Jeremy Harris, the Earl of Dunreaven--is as hard up as she is, her way forward is clear. But the path to independence is a bumpy one fraught with hazards and heartbreaking choices. A blackmailing socialite threatens to derail Astra's reputation. A brainless business partner just might drive her even further into debt. And a series of bruising scandals dogs her every step of the way.

From the bustle of London to the country estates of the aristocracy, Astra embarks on a journey that tests her brains, wit, and mettle as never before. But one way or another, Astra Davies is dead set on proving she's no ordinary Bright Young Thing.

Praise For A Bright Young Thing: A Novel…

Praise for A Bright Young Thing:
"Fans of Downton Abbey will enjoy the depictions of grand houses and estates—with maids, butlers, and high society traditions—as well as the changes that women were making for themselves during that time."
—Booklist

“Charming and clever, A Bright Young Thing is historical fiction you won’t want to put down. A thoroughly enjoyable read that will resonate with readers today.”
—Judithe Little, USA Today bestselling author of The Chanel Sisters

“A Bright Young Thing is an intriguing novel of mystery, love, and survival in the glittering and backstabbing high society of 1930s England...Brianne Moore weaves a rich story of scheming socialites, dark family secrets, and a determined heroine that will captivate readers until the end.”
—Georgie Blalock, author of The Other Windsor Girl

Brianne Moore spent her childhood spinning tales of bold princesses and brilliant ladies, and developing a deep love for British history and authors. After receiving a degree in English literature from Macalester College, she embarked on a career in journalism and web publishing. Once she moved from Pennsylvania to Edinburgh, Scotland, she felt like she had finally come home. She now lives by the sea in East Lothian with her husband, two sons, and bulldog, Isla. Her debut novel, All Stirred Up, was published by Alcove Press in 2020.
Loading...
or
Not Currently Available for Direct Purchase