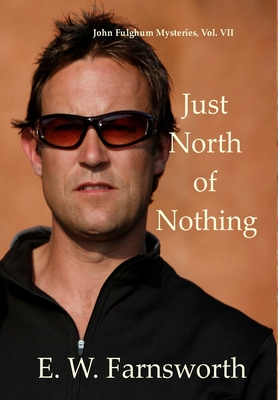 Just North of Nothing (Hardcover)

When a former war buddy talks John Fulghum, a Boston area Private Investigator, into providing security analysis for the partnership of the Houbara Bustard Preserve, located a few miles north of Nothing, Arizona on the road from Phoenix to Las Vegas, he knows it won't be an ordinary gig. After convincing two old friends--Sylvia Blackwood and Darcy Latimere--to help him out, he discovers the exclusive resort is actually the venue for a Weapons of Mass Destruction terrorist operation aimed at America.

Fulghum's old friend, Ken Mander of the CIA, gets involved to bring down the terrorists and deal with the WMD while the detective and his friends are joined by his former intelligence contact Alia, who is now the fourth wife to the leading terrorist. Will Fulghum save the day yet again, or will the stay at the luxurious spa be the end of him?

"Farnsworth has ripped his story from the media headlines with a credible plot out of his own experience, that may hold more truth than classification issues will permit to be divulged."

"E. W. Farnsworth, an Arizona writer, has produced a blockbuster thriller with elements of romance and terror, set mostly in a billionaires' spa for falconers to hunt the delicious fowl, the houbara bustard, and for Arab sheiks to exercise racehorses, bred for desert conditions."

The seventh in Farnsworth's John Fulghum, PI, Mysteries, series, Just North of Nothing is written for film adaptation. It brings Fulghum and his associates together in a fast-paced, tersely-plotted nail-biter with lots of local Arizona and Nevada color, including the Mafia, and corrupt local law enforcement.