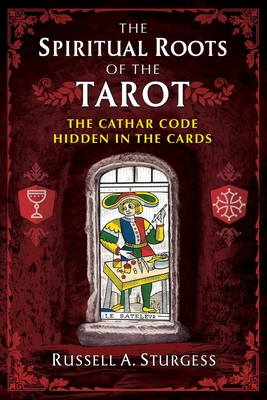 The Spiritual Roots of the Tarot

The Cathar Code Hidden in the Cards

• Shares the author’s self-development program, based on the wisdom of the cards, for creating a lifestyle filled with peace, joy, good health, and meaning

The Holy Grail has been discovered. Not a cup or chalice as myth leads us to believe, the Holy Grail is sacred knowledge of the path to enlightenment and inner peace. While author Russell Sturgess was conducting research on the Marseille Tarot, he found evidence that this tarot deck, while masquerading as a simple card game, held the teachings of an ancient heretical religious group from southern France, the Cathar, believed to be the keepers of the Holy Grail. To avoid persecution by the papacy, this sect used portable art like illuminations to convey their Gnostic Christian teachings, in the same way the stained glass windows of churches spoke to their congregations. This portable Cathar art then inspired the creation of the Tarot.

After his breakthrough discovery of a hidden key on the Magician and Strength cards, Sturgess examined the Major Arcana cards further and used the key to unlock their symbolism, discovering clear instructions for recalibrating human consciousness and achieving enlightenment, with specific cards representing pivotal points in making the journey from ignorance to awareness. Decoding the cards in detail, the author shows how they reveal a journey of transformed consciousness that can result in finding what the Cathar called “the kingdom of heaven.”

Calling this sacred knowledge “the Cathar Code,” Sturgess reveals his personal development program based on the Code that opens access to a meaningful lifestyle filled with peace and joy and that naturally fosters health and well-being. He shows how these teachings offer a clear path that transforms a life burdened by fear of failure, rejection, and scarcity into one with clarity of purpose, self-honoring, kindness, and the abundance that comes with making a fulfilling difference in the world.

Praise For The Spiritual Roots of the Tarot: The Cathar Code Hidden in the Cards…

“Russell has presented a unique, coherent, and persuasive model of the tarot as an illustrated key to the rose garden of the spiritual life. It has not been since the 1980 anonymous publication of Méditations sur les 22 arcanes majeurs du Tarot that any similar wide-ranging spiritual survey has been assayed of the Major Arcana of the Tarot de Marseille. In following the Fool’s journey through the frames of Cathar history, the Beatitudes, and other elements of Christian mysticism, The Spiritual Roots of the Tarot provides a timely and invaluable guide to a life lived in love and mindfulness.”
— Marcus Katz, author of Tarosophy and coauthor with Tali Goodwin of Secrets of the Waite-Smith Tarot

“Millions of words have been written about the tarot and the Cathars. What distinguishes Russell’s rather excellent book, which brings the two topics together, is the coherence that laces his ideas. Russell is obviously not simply a scholar or enthusiast but a practitioner of the ideas he lays out, and this enables him to find deeper connections between otherwise unrelated things. This book lays out a viable and powerful spiritual path that, I think, bears deep study. There is also just so much material here for students of the tarot, for those curious about the spirituality of the Cathars, or for anyone merely curious about the depths of esoteric Christianity. A wholehearted grace emanates from these pages, which promise to lead you deeper on your spiritual journey; take the invitation!”
— Most Reverend Timothy Mansfield, Bishop of New South Wales, Apostolic Johannite Church

“This rich and fascinating book deepens our understanding of the tarot by grounding it in its historical context.”
— Richard Smoley, author of A Theology of Love

Russell A. Sturgess has practiced as a complementary health professional since the mid-1970s, developing his unique approach to osteopathic massage, peace-centered healing, and mindfulness practice. He has personally trained over a thousand students throughout the United States, New Zealand, and Australia. He lives in Maroochydore, Queensland, Australia.
Loading...
or support indie stores by buying on