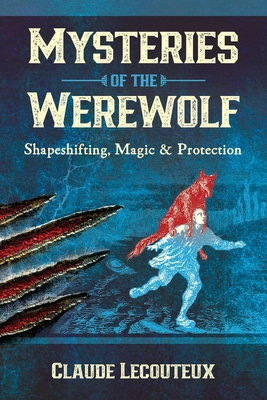 Mysteries of the Werewolf

• Examines werewolf tales and stories from early Greece, Scandinavia, France, Germany, Eastern Europe, China, and Japan, as well as legends of other shapeshifting creatures such as were-tigers, were-jackals, and were-caribou

• Looks at the various ways people become werewolves, including pacts with the devil, magic, and spells, and explores ways to identify, escape, and do away with werewolves

An animal both mythical and real, a terrifying predator and the villain in many a fairytale, the wolf has haunted the human imagination since prehistoric times. Even more disturbing is the possibility that some individuals can change into wolves. These werewolves, or lycanthropes, are able to divest themselves of their human nature and transform into enemies that are all the more dangerous as no one knows who they are. Means of protecting oneself from this beast have been a concern for people since Classical Antiquity, and werewolf legends offer both fascinating tales of horror as well as advice for thwarting these creatures or breaking the werewolf curse.

In this exploration of werewolf folktales, legends, and historical accounts, Claude Lecouteux examines werewolf beliefs and stories from early Greece to the post-medieval age, including the beliefs of the Norse and tales from France, Germany, Eastern Europe, China, and Japan. The author includes the trial records from medieval Europe for individuals who were tried on suspicion of being werewolves and the personal records of people whose spouses could shapeshift into wolves. He investigates the nature of the werewolf, how it can act as the double or lead to out-of-body experiences, and its counterparts in other parts of the world such as were-tigers, were-jackals, and even were-caribou in the Inuit regions of North America. Lecouteux also looks at the various ways people become werewolves, including pacts with the devil and spells, and explores ways to identify, escape, and do away with werewolves. Sharing werewolf mysteries from around the world, Lecouteux shows that by studying the legends of the werewolf we also gain insight into the psyche and ancient imagination of humanity.

Praise For Mysteries of the Werewolf: Shapeshifting, Magic, and Protection…

“Mysteries of the Werewolf contains an incredibly comprehensive collection of texts about the mythology of the werewolf. Claude Lecouteux manages to bring to light many of the finer nuances in the depiction of this mythical being throughout a variety of countries and cultures. He emphasizes the evolution of the lore throughout history, drawing upon several lesser known documents and processes.”
— Ion Talos, former professor of popular literature at the University of Cologne and author of Petit d

“The concept of the werewolf has frightened humankind for millennia, as documented throughout history via legends and court trials. In his new book, Claude Lecouteux provides a vivid presentation of this fascinating and mysterious beast. Highly recommended!”
— Bengt af Klintberg, professor and author of The Types of the Swedish Folk Legend

“Claude Lecouteux is the most versatile and wide-ranging of the scholars of the medieval imagination--any book of his is a treat.”
— Ronald Hutton, professor of history at the University of Bristol, England, and author of Witches, Dr

“Lecouteux is a genius. I have been gratefully following his research--which provides information I have never found in other locations--for years.”
— Maja D’Aoust, Witch of the Dawn and author of Familiars in Witchcraft

"Where to begin with werewolves? Where CAN’T you? Lecouteux explores historical texts from EVERYWHERE: medieval Europe (of course), early Greece, 20th century Romania, 10th century China, 19th century Russia, 1st century Rome, and I think you’re starting to get the point. There are so many ways one becomes a werewolf or were-creature. Sometimes it’s a blessing, many times it’s a curse. Sometimes it can be undone, or controlled, other times, it’s a lifetime. Mysteries of the Werewolf explores it all. What can I say? Lecouteux does it again. If you’re interested in werewolves, this is a great resource!"
— The Magical Buffet