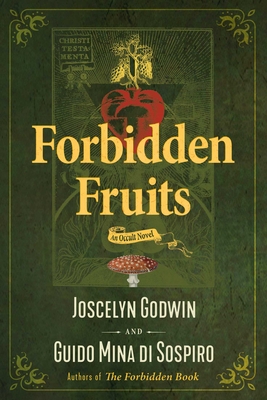 • Reveals a secret ritual at the heart of Christianity, knowledge of which was passed on underground by Gnostics and alchemists for centuries

• Explore the use of the Kykeon, the psychedelic brew of the Eleusinian mysteries, which offers those who drink it a direct experience of God

Amid the European refugee crisis, with the background of Southern Europe having become the point of arrival for hundreds of thousands of desperate migrants, Monica Bettlheim, an American archaeologist, is trying to recapture her former fame. She has a mission to uncover prehistoric cultures that conventional archaeology and history both fear and deny. Her search is sponsored by an eccentric aristocrat, the larger-than-life Maltese billionaire Sebastian Pinto.

On an underwater expedition off the coast of Malta, Monica finds a mysterious golden pomegranate that dates back to prehistoric times. Within it, she discovers ancient remnants of the Kykeon, the hallucinogenic sacrament of the Eleusinian mysteries, which offers those who drink it a direct experience of God. As the discovery leads to blackmail and murder, Monica uncovers a secret ritual right at the heart of Christianity, knowledge of which was passed on underground by Gnostics and alchemists for centuries.

Reluctantly, Monica teams up with the elusive and troubled Rafael, Pinto’s son, who for some years has been deeply immersed in esoteric studies. Driven by the need to avenge a murder and uncover the activities of an international crime syndicate, they risk their lives by reviving the sacred ritual--and are confronted by the most terrifying revelation of all.

"Blending together the Atlantis myth, prehistoric civilizations, alchemy, postmodern politics, international intrigue, and just the right amount of esoteric eroticism, they've come up with a magical cocktail that keeps readers turning the page."
— Gary Lachman, author of Dark Star Rising, and The Return of Holy Russia

“A wild tale of adventure and intrigue involving a 20,000-year-old secret entheogen sequestered in a golden pomegranate and recovered from the ocean depths off the coast of Malta. The discovery quickly spins off into a fast-paced story, weaving together ancient rites, secret cults, alchemical transformations, shamanic shenanigans, and ruthless, very bad people. It’s a real page-turner and great fun! I enjoyed it immensely.”
— Dennis McKenna, ethnopharmacologist and author of Brotherhood of the Screaming Abyss

“In Forbidden Fruits, Joscelyn Godwin and Guido Mina di Sospiro, authors of the acclaimed The Forbidden Book, return with more secrets and discoveries that the protectors of complacency would like to keep under wraps. Blending together the Atlantis myth, prehistoric civilizations, alchemy, postmodern politics, international intrigue, and just the right amount of esoteric eroticism, they’ve come up with a magical cocktail that keeps captivated readers turning the page. Take a bite of the forbidden fruit: expulsion from the garden was never so tasty.”
— Gary Lachman, author of Dark Star Rising and The Return of Holy Russia

“Forbidden Fruits is a long-awaited follow-up to Godwin and Mina di Sospriro’s first coauthorship, The Forbidden Book. Now, after eight years, they have released a novel that will be a favorite among readers of esotericism as scholarship. Authentic insights into ancient and modern occult practices and suspense meet in the alchemical retort of the “Society of Harmony.” With the entheogenic key as its focus, Forbidden Fruits provides insight into ancient practices and visions and, like its predecessor, is prophetic, with the island of Malta being the focal point of a near-Lovecraftian evil that is encircling the world. Complete with psychedelic journeys, therapeutic blasphemy, and child seers, Forbidden Fruits is a journey into the unknown and one that will leave readers questioning the nature of reality--and how to know the real from the unreal--in their spiritual journey and the world around them.”
— Mark Stavish, author of Egregores: The Occult Entities That Watch Over Human Destiny

“The best part about this book is how it incorporates alchemy, archeology, and entheogens into the plot. While there are countless stories of wizards, magicians, and occult societies dabbling in labs trying to find the Elixir of Life or the Philosopher’s Stone, I had never seen alchemy from the lens portrayed in Forbidden Fruits. Godwin and di Sospiro have done a wonderful job of illuminating the alchemy through Raphael and his journey to uncover the mysteries hidden within; readers get to experience firsthand the character’s perspective of ritually consuming the sacred soma.”
— Alanna Kali, Indie Mystic

“A book to be enjoyed at multiple levels from whodunnit to who are we really?”
— Golgonooza

"There are trials and ordeals, a pinch of sex, some good food, high fashion, and I know more about Malta now than I ever did. My suggestion to the reader is make a start on a healthy diet and reserve a place on your menu for Forbidden Fruits."
— Gary Lachman, New Dawn Magazine

"Godwin and Mina di Sospiro use their novels to impart actual information or at least well-researched speculation. Although both authors shared the writing tasks, there is a singular authorial voice and style, and it is an elegant one. Yes, this is pop literature, but it is pop lit of a very high quality. The plot is tightly woven and without the holes of logic or detail that seem to plague Brown’s best sellers. Whether it is speculation about the ancient roots of religion or a description of an actual method of skrying or a discussion of alchemical symbolism, our authors know that of which they speak--or, at the very least, know the best sources to tap. I have no hesitation to recommend this book..."
— Jay Kinney, Quest Magazine

Joscelyn Godwin was born in Kelmscott, Oxfordshire, England on January 16, 1945. He was educated as a chorister at Christ Church Cathedral School, Oxford, then at Radley College (Music Scholar), and Magdalene College, Cambridge (Music Scholar; B.A., 1965, Mus. B., 1966, M.A. 1969). Coming to the USA in 1966, he did graduate work in Musicology at Cornell University (Ph. D., 1969; dissertation: "The Music of Henry Cowell") and taught at Cleveland State University for two years before joining the Colgate University Music Department in 1971. He has taught at Colgate ever since.

Guido Mina di Sospiro was raised in Milan, Italy. An award-winning novelist and essayist, he has written several books, including The Forbidden Book, coauthored with Joscelyn Godwin. He maintains a blog on Reality Sandwich and for New English Review. He lives with his wife between the Washington, DC, area and central Italy.
Loading...
or
Not Currently Available for Direct Purchase