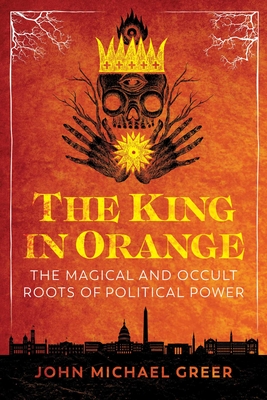 The King in Orange

The Magical and Occult Roots of Political Power

• Examines in detail the failed magical actions of Trump’s opponents, with insights on political magic from Dion Fortune’s war letters

Magic and politics seem like unlikely bedfellows, but in The King in Orange, author John Michael Greer goes beyond superficial memes and extreme partisanship to reveal the unmentionable realities that spawned the unexpected presidential victory of an elderly real-estate mogul turned reality-TV star and which continue to drive the deepening divide that is now the defining characteristic of American society.

Greer convincingly shows how two competing schools of magic were led to contend for the presidency in 2016 and details the magical war that took place behind the scenes of the campaign. Through the influence of a number of occult forces, from Julius Evola to chaos magicians as well as the cult of positive thinking, Greer shows that the main contenders in this magical war were the status quo magical state--as defined by the late scholar Ioan Couliano--which has repurposed the “manipulative magic” techniques of the Renaissance magi into the subliminal techniques of modern advertising, and an older, deeper, and less reasonable form of magic--the “magic of the excluded”--which was employed by chaos magicians and alt-right internet wizards, whose desires coalesced in the form of a frog avatar that led the assault against the world we knew.

Examining in detail the magical actions of Trump’s opponents, with insights on political magic from occultist Dion Fortune’s war letters, the author discusses how the magic of the privileged has functioned to keep the comfortable classes from being able to respond effectively to the populist challenge and how and why the “Magic Resistance,” which tried to turn magic against Trump, has failed.

Showing how the political and magical landscape of American society has permanently changed since the 2016 election cycle, Greer reveals that understanding the coming of the King in Orange will be a crucial step in making sense of the world for a long time to come.

Praise For The King in Orange: The Magical and Occult Roots of Political Power…

“Against a humorous and informed survey of the American political landscape, Greer analyzes the 2016 U.S. presidential election through the lens of magic. Taking his cue from Ioan P. Couliano’s masterpiece Eros and Magic in the Renaissance, Greer shows the power of symbols in forming popular opinion and political action and with it the competing and combating views of magic of the two principal parties: the magic of the privileged versus pragmatic positivism and where they meet in the Faustian dream of perpetual progress. An essential book for anyone seeking to understand the direction in which ‘cancel culture,’ the industrial world, and its formerly liberal democracies are heading.”
— Mark Stavish, author of Egregores

“John Michael Greer is one of the true original minds on the scene in these rather dire days of the wobbling American experiment. His books hack through the precooked ideology of our so-called thinking classes to present always-fresh connections between events on the ground and the deep mysteries of our being here in the first place, especially the issues of good and evil, which so befog us today.”
— James Howard Kunstler, author of The Long Emergency

“Greer does an excellent job explaining the primary division amongst Americans as being investment class, salary class, wage class, and welfare class. Things get more interesting when Greer starts tracking the chaos magic of the 4Chans, and the reactionary workings of the magical resistance. The King in Orange does an excellent job comparing and contrasting not only the philosophies of these groups, but also their operational practices. There is much to be learned about magic, just from the author’s observations and explanations. The King in Orange is a thought provoking look at the 2016 election through the prism of Greer’s political opinions and magical experience. Whether you agree 100% with his findings, you will still find yourself with much to consider."
— The Magical Buffet

"The King in Orange is not an easy read, as there are some hard truths to swallow regardless of where your political beliefs lay. But this book opened my eyes to the roots of the current political climate that go deeper than just standard party issues. There are fundamental shifts to the American way of life that are leading to uncertainty about the future. Being more aware of the occult forces in play on both sides helps to be discerning in shaping our beliefs. I have been recommending this book to quite a few people recently who are wondering what’s going on in the politics right now because it’s a really thought-provoking read that delves into the psychological factors effecting the collective consciousness."
— Alanna Kali, Musing Mystical

John Michael Greer is a highly respected writer, blogger, and independent scholar who has written more than 70 books, including The Long Descent, Circles of Power, and the award-winning New Encyclopedia of the Occult. An initiate in a variety of Hermetic, Masonic, and Druidic lineages, he served for twelve years as Grand Archdruid of the Ancient Order of Druids in America. He lives in Rhode Island.
Loading...
or support indie stores by buying on