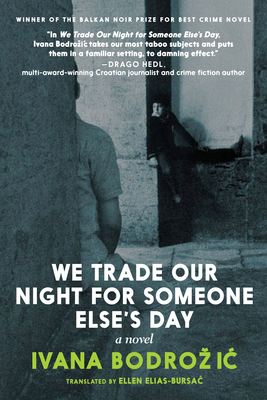 We Trade Our Night for Someone Else's Day

A thriller of the ex-Yugoslavia Wars.

"Bodrozic, mediated by Ellen Elias-Bursac’s assured translation, chronicles what a country chooses to remember, and what it consciously forgets, with confidence and grace." —Sarah Weinman, New York Times Book Review

The city of Vukovar, situated on Croatia's easternmost periphery, across the Danube River from Serbia, was the site of some of the worst violence in the wars that rocked ex-Yugoslavia in the early '90s. It is referred to only as "the city" throughout this taut political thriller from one of Europe's most celebrated young writers. In this city without a name, fences in schoolyards separate the children of Serbs from those of Croats, and city leaders still fight to free themselves from violent crimes they committed--or permitted--during the war a generation ago. Now, it is left to a new generation--the children, now grown up, to extricate themselves from this tragic place, innocents who are nonetheless connected in different ways to the crimes of the past.
Nora is a journalist assigned to do a puff piece on the perpetrator of a crime of passion--a Croatian high school teacher who fell in love with one of her students, a Serb, and is now in prison for having murdered her husband. But Nora herself is the daughter of a man who was murdered years earlier under mysterious circumstances. And she wants, if not to avenge her father, at least to bring to justice whoever committed the crime. There's a hothouse intensity to this extraordinary noir page-turner because of how closely the author sets the novel within the historical record. This city is unnamed, the story is fictional, so it can show us what actually happened there.

Praise For We Trade Our Night for Someone Else's Day: A Novel…

"A novel that, as translated, is plainly written but immensely powerful in its portrayal of a damaged society."
—The Irish Times

“In We Trade Our Night for Someone Else’s Day, Ivana Bodrožić takes our most taboo subjects and puts them in a familiar setting, to damning effect.”
—Drago Hedl, multi-award-winning Croatian journalist and crime fiction author

"In an unnamed Croatian city in 2010, reporter Nora Kirin, the heroine of this searing political thriller from Bodrozic (The Hotel Tito), hopes to expose the city’s sleazy government. Instead, she’s assigned to write a lurid piece about a Croatian high school teacher who murdered her brutal husband, a Croatian war veteran, while having an affair with a student, an ethnic Serb. Nora’s own troubled past distracts her from this task. Her father disappeared in 1991, just before a horrifying massacre of Croats by Serbs. As Nora seeks the truth about his fate, she uncovers heinous instances of immorality throughout a city supposedly promoting “peaceful reintegration” between Croats and Serbs. In her effort to get justice for her father, Nora dooms her own love affair. Bodrozic smoothly integrates Nora’s gripping personal story with, as revealed in a translator’s note, the recent history of Vukovar, the author’s native city. Noir fans won’t want to miss this one."
—Publishers Weekly, starred review

"Bodrozic, mediated by Ellen Elias-Bursac’s assured translation, chronicles what a country chooses to remember, and what it consciously forgets, with confidence and grace."
—Sarah Weinman, New York Times Book Review


"Ivana Bodrožić’s newly translated novel of trauma, vengeance, and despair is as noir as they come...Bleak, devastating, and lyrical in equal measures."
—Molly Odintz, CrimeReads

Ivana Bodrozic was born in Vukovar, Croatia, in 1982, where she lived until the Yugoslav Wars started in 1991. That year her father disappeared while fighting for Croatian independence and she and the rest of her family moved to a refugee hotel in Kumrovec. In 2005, she published her first poetry collection, The First Step into Darkness, and in 2010 her acclaimed and bestselling first novel The Hotel Tito, which won three major awards in Croatia and the Prix Ulysse for Best Debut Novel in France. It was published by Seven Stories in 2017. Since then Bodrozic released her second poetry collection, A Crossing for Wild Animals, and a short story collection, 100% Cotton. We Trade Our Night for Someone Else's Day is her second novel and her first political thriller. Ellen Elias-Bursac translates fiction and nonfiction from Bosnian, Croatian, and Serbian. She has taught in the Harvard University Slavic Department and is a contributing editor to Asymptote. Her most recent translation for Seven Stories is Robert Perisic's novel No-Signal Area. She lives in Boston.
Loading...
or support indie stores by buying on