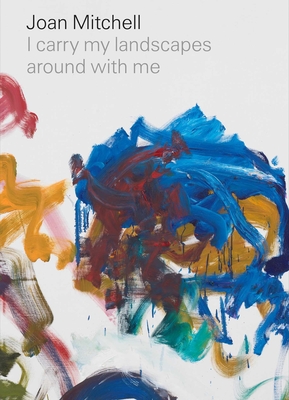 I carry my landscapes around with me

I carry my landscapes around with me focuses on American abstract artist Joan Mitchell’s large-scale multipanel works from the 1960s through the 1990s.

Mitchell’s exploration of the possibilities afforded by combining two to five large canvases allowed her to simultaneously create continuity and rupture, while opening up a panoramic expanse referencing landscapes or the memory of landscapes.

Mitchell established a singular approach to abstraction over the course of her career. Her inventive reinterpretation of the traditional figure-ground relationship and synesthetic use of color set her apart from her peers, resulting in intuitively constructed and emotionally charged compositions that alternately evoke individuals, observations, places, and points in time. Art critic John Yau lauded her paintings as “one of the towering achievements of the postwar period.”

Published on the occasion of the eponymous exhibition at David Zwirner New York in 2019, this book offers a unique opportunity to explore the range of scale and formal experimentation of this innovative area of Mitchell’s extensive body of work. It not only features reproductions of each painting in this selection as a whole, but also numerous details that allow an intimate understanding of the surface texture and brushwork. In the complementing essays, Suzanne Hudson examines boundaries, borders, and edges in Mitchell’s multipanel paintings, beginning with her first work of this kind, The Bridge (1956), considering them as both physical and conceptual objects; Robert Slifkin discusses the dynamics of repetition and energy in the artist’s paintings, in relation to works by Monet and Willem de Kooning, among others.

Praise For Joan Mitchell: I carry my landscapes around with me…

“What makes Mitchell great is her ability to infuse paint with an endless range of feelings. That is what gives her paintings their staying power, why they are one of the towering achievements of the postwar period.”
— John Yau

"[Mitchell] brought an enormity to her painting, whether in individual gestures—juxtaposing the large and sweeping, with the small and delicate—or in the size of the canvases themselves… In the paintings we find immensity but not monumentality (a word Mitchell distrusted), something great yet still seemingly fluid, organic, akin to nature, like the trees she frequently referenced in connection to her art."
— John Vincler

“After all these years, these paintings from the ‘60s retain their musicality…”
— Jeremy Sigler

Born in Chicago and educated at the Art Institute of Chicago, from which she received a BFA (1947) and an MFA (1950), Joan Mitchell moved in 1949 to New York, where she was an active participant in the downtown arts scene. She began splitting her time between Paris and New York in 1955, before moving permanently to France in 1959. In 1968, Mitchell settled in Vétheuil, a small village northwest of Paris, while continuing to exhibit her work throughout the United States and Europe. It was in Vétheuil that she began regularly hosting artists at various stages of their careers, providing space and support to develop their art. When Mitchell passed away in 1992, her will specified that a portion of her estate should be used to establish a foundation to directly support visual artists.

A Los Angeles–based art historian and critic, Suzanne Hudson is an associate professor of art history and fine arts at the University of Southern California. A longtime contributor to Artforum, she is the author of books including Robert Ryman: Used Paint (2009) and Agnes Martin: Night Sea (2017). Mary Weatherford is forthcoming in 2019 from Lund Humphries and Contemporary Painting in 2020 by Thames & Hudson. Supported by a New Directions Fellowship from the Andrew W. Mellon Foundation, she is pursuing research into the practical applications of art making for Better for the Making: Art, Therapy, Process, a study of the therapeutic origins of process within American modernism.

Robert Slifkin is an associate professor of fine arts at the Institute of Fine Arts, New York University. He is the author of The New Monuments and the End of Man: U.S. Sculpture between War and Peace, 1945–1975 (2019) and Out of Time: Philip Guston and the Refiguration of Postwar American Art (2013), which was awarded the Phillips Book Prize. His essays and reviews have appeared in such magazines and journals as Artforum, Art in America, Art Bulletin, Art Journal, October, Oxford Art Journal, and Racquet.
or support indie stores by buying on