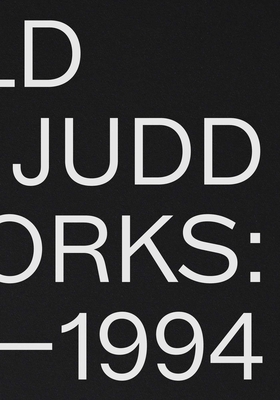 A sweeping selection of Donald Judd’s iconic and ambitious works alongside a diverse collection of newly commissioned writings.

One of the most significant American artists of the postwar period, Judd rigorously experimented with color, form, material, and space. The works in this catalogue range from the artist’s expansive installations to self-contained single units, yielding valuable new insights into his process and approach. The survey includes one of his largest and most intricate installations of sixty-three wall-mounted plywood boxes, conceived in 1986. Other works include variations on some of Judd’s most recognizable forms, executed in materials such as Cor-ten steel, plexiglass, copper, plywood, brushed aluminum, and enameled aluminum. Brilliant and exacting reproductions capture these works in vivid detail. Following the major Judd retrospective at The Museum of Modern Art, New York, in 2020, this book serves as a companion volume.

With contributions from a wide range of voices—art historians, critics, writers, and performers— this publication includes rich new writings on Judd’s oeuvre, art criticism, and enduring influence. Artworks: 1970–1994 is published on the occasion of the eponymous 2020 exhibition at David Zwirner New York.

With the intention of creating straightforward work that could assume a direct material and physical “presence” without recourse to grand philosophical statements, Donald Judd (1928-1994) eschewed the classical ideals of representational sculpture to create a rigorous visual vocabulary that sought clear and definite objects as its primary mode of articulation.

Johanna Fateman is a writer, art critic, and owner of Seagull salon in New York. She is a regular contributor to the New Yorker and 4Columns, and she is a contributing editor for Artforum.

Lucy Ives is a novelist and critic. She recently edited The Saddest Thing Is That I Have Had to Use Words: A Madeline Gins Reader (2020), the first definitive anthology of Gins’s poetry and experimental prose. A collection of Ives’s short stories, Cosmogony, is forthcoming in early 2021.

Thessaly La Force is a writer and features director of T: The New York Times Style Magazine. She lives in New York City.

Flavin Judd is artistic director of Judd Foundation. He has designed architectural spaces and has written for exhibition catalogues and other publications. He is codesigner and coeditor of Donald Judd Writings (2016), Donald Judd Interviews (2019), and Donald Judd Spaces (2020).

Branden W. Joseph is the Frank Gallipoli Professor of Modern and Contemporary Art at Columbia University and a founding editor of the journal Grey Room. He is the author of five books, including Random Order: Robert Rauschenberg and the Neo-Avant-Garde (2003), Beyond the Dream Syndicate: Tony Conrad and the Arts after Cage (2008), and Experimentations: John Cage in Music, Art, and Architecture (2016). He has written on a variety of figures within the fields of art, music, and cinema, including Hilma af Klint, Angela Bulloch, Mike Kelley, Jutta Koether, Lee Lozano, Robert Morris, and Andy Warhol. In 2019 he was the recipient of both a Guggenheim Fellowship and a Paul Mellon Visiting Senior Fellowship from the Center for Advanced Study in the Visual Arts at the National Gallery of Art, Washington, DC.

Anna Lovatt is assistant professor of art history at Southern Methodist University in Dallas. Her research focuses on the relationship between systems and subjectivity in art of the 1960s onward, particularly in the context of Minimal, post-Minimal, and conceptual art. She is the author of Drawing Degree Zero: The Line from Minimal to Conceptual Art (2019).

Michael Stone-Richards is Professor of Critical Practice and Visual Studies at the College for Creative Studies in Detroit. He is the author of Logics of Separation (2011) and numerous studies in English and French on modern art as well as on the poetry of Theresa Hak Kyung Cha, Prynne, Celan, and the Negro Spirituals. His current research bears on questions of pedagogy and transmission in the art and design, blackness and biopolitics, and the language of moral perfectionism in the work of Guy Debord and John Berger. He received a Warhol Foundation Grant for his current book project work on Care of the City.

Mimi Thompson is a writer living in New York City. She has written for galleries, museums, and various publications about different artists including Keith Haring, Robert Rauschenberg, Al Taylor, and Jane Wilson.

Marta Kuzma is the Stavros Niarchos Foundation Dean and Professor of the Yale School of Art.

Wendy Perron is a dancer and choreographer turned writer and editor. She was a member of the Trisha Brown Dance Company in the 1970s and choreographed more than forty works for her own group. She has taught dance at Bennington College, Princeton University, and New York University, and has given lectures on contemporary dance across the country. When the New York Foundation for the Arts initiated its Hall of Fame in 2011, Perron was inducted as its first dance artist. In addition to Dance Magazine, where she was editor in chief from 2004 to 2013, Perron has written for The New York Times, the Village Voice, vanityfair.com, and publications in Europe and China. Her selected writings, Through the Eyes of a Dancer, was published in 2013, and her acclaimed book, The Grand Union: Accidental Anarchists of Downtown Dance, 1970–1976, was published in 2020. Currently Perron teaches at NYU’s Tisch School of the Arts and Juilliard.
Loading...
or support indie stores by buying on