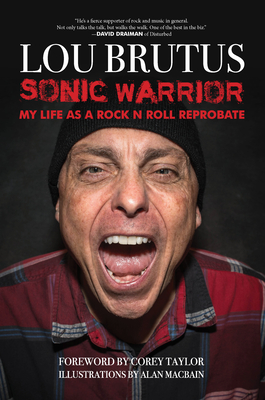 My Life as a Rock N Roll Reprobate: Tales of Sex, Drugs, and Vomiting at Inopportune Moments

FEATURING A FOREWORD BY COREY TAYLOR OF SLIPKNOT For lack of a better term, Lou Brutus is a "Professional Music Fan." He lives the dream of millions by traveling the Earth attending concerts and interviewing rock stars. He's spent his life blasting tunes on the radio, becoming the first to play all of your favorite bands, and gaining access to literally thousands of music events. There is no one in the media who has seen more shows or conducted more on-site interviews than Lou. Sonic Warrior is a collection of insane-but-true stories from the career of Rock Radio legend Lou Brutus. Each chapter is a separate tale that careens around his 40+ years of covering concerts, interviewing music's biggest stars, and influencing generations of radio listeners. Starting with the first show he attended (Black Sabbath at New York City's Madison Square Garden in December 1976, where he threw up Boone's Farm Strawberry Wine all over his older sister's boyfriend) and continuing to the present day (where he doesn't puke as much). Stops along the way include Live Aid in Philadelphia (where he threw up on the entire crowd from a helicopter), the Arctic (where he didn't throw up on anyone but did get in a mosh pit with the native Inuit villagers as Metallica performed a song about sodomizing a goat), Live Earth in London (where he chugged ale with Spinal Tap's "Stonehenge" dwarfs and almost threw up), and the New Jersey Turnpike (where the tour bus he was traveling in ran over a guy, which is much worse than throwing up). Whether having his life energy drained through the palm of his hand by Keith Richards of The Rolling Stones, watching cocaine get snorted off a stripper's ass in Pantera's dressing room, or drooling in his own lap after smoking some kind of mutant mind warp demon weed with Snoop Dogg, Brutus gives a hilariously unvarnished look at the realities of the music industry from his fly-on-the-wall, "I'm just the guy here to interview the band" vantage point. The book also features a Foreword by his friend Corey Taylor, Grammy Award winning singer for Slipknot and Stone Sour, as well as an original illustration for each chapter by artist Alan MacBain.

Lou Brutus, for lack of a better term, is a Professional Music Fan. He's lives the dream of millions by traveling the Earth attending concerts and interviewing rock stars. He's spent his life blasting tunes on the radio, becoming the first to play all your favorite bands, and gaining access to literally thousands of music events. He has severe hearing damage. Lou has smoked weed with Hunter S. Thompson and Snoop Dogg, chugged ale with Spinal Tap's "Stonehenge" dwarfs, been in a tour bus that ran over a guy on the NJ Turnpike, and puked on the floor of many of the world's most prestigious concert venues. He also sings in a couple of crazy bands, one of which has gotten him death threats. If he sells enough copies of this book he will buy a KISS pinball machine. Brutus lives outside Washington, DC with his family, including Darla the Wonder Dog, subsisting on a diet of black coffee, Rock N Roll, and tinnitus.
Loading...
or support indie stores by buying on