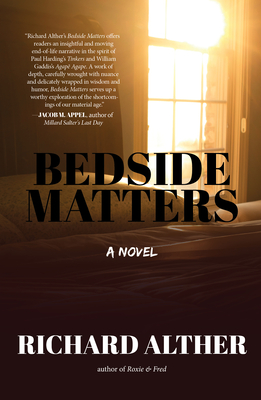 Bedside Matters, the fifth novel by painter and writer Richard Alther, enlivens its singular setting with an unexpected journey at life's end for one man. Walter had mastered the business world at an unaccounted cost to discover in old age and ill-health a disease that would render his body useless. Walter is a complicated man now captured in the gilded cage of his mansion, watching the world, his world, go by without him. Visitors with agendas appear to remind him of his life and responsibilities: Walter's ex-wife Polly, a voluptuous handful as he would describe her, Paula, his chip-off-the-old block all-business daughter, Gavin, his attractive and irresponsible son with a dodgy track record, and the irrepressible daydreams and memories that flood his consciousness with emotions long shunned. While Walter reads the 13th-century Persian poet Rumi's work, his inner life takes on a new shape, as his body continues to betray him and deteriorate. He says a long, reluctant goodbye while engaging a side to life that has been unexplored until now. The natural world in the garden outside his window pleasures as he battles pain. New people enter his world to invigorate his last days, including his physical therapist Tressie, a woman so enticing he counts the minutes between visits. Succession becomes an obsession with Paula as she builds her empire, and Gavin tries to start over again after another stint in rehab. Walter watches them play the game of life as he becomes a mere observer from the solitude of his stately manor, lost and found in his thoughts. For the first time, he seems to experience life as a poet would, even as the inevitable end comes closer. A cinematic non-linear take and frank examination of the promise of life, even at its end, Bedside Matters concern us all at one time or another as we ask the ultimate question: what matters most?

Richard Alther was born and raised in suburban New Jersey. He graduated as an English major from Cornell University and pursued twin careers as a writer and painter. He is the author of five novels: The Decade of Blind Dates (2008), Siegfried Follies (2010), The Scar Letters (2013), Roxie & Fred (2017), and Bedside Matters, to be released by Rare Bird Books on March 9, 2021 After several years in Manhattan, he moved to Vermont and earned his family's living writing extensively about vegetable gardening and homesteading. His simultaneous career as an exhibiting painter included gallery representation and one-person shows in Montreal, London, Los Angeles, Boston, Dallas, and Florida. Richard has trained and competed nationally as a Masters Swimmer for several years, reaching the top ten at age 50. He divides his time between homes in Palm Springs, California and the Lake Champlain area of Vermont, where his grandchildren reside. Follow Richard's blogs on Medium: https: //richardalther.medium.com.
Loading...
or support indie stores by buying on