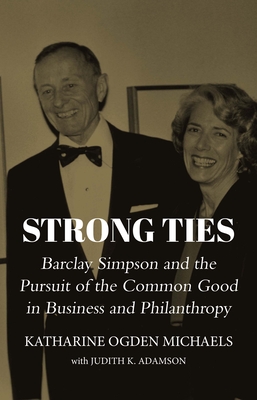 An in-depth look at the life of Oakland, California native, Barclay Simpson, Strong Ties focuses on the set of convictions and leadership qualities that allowed Simpson to build a successful business from nothing and to become one of the major philanthropists in the San Francisco Bay Area. A Navy pilot during World War II, he didn't graduate from college until over 20 years after he dropped out of UC Berkeley in 1946 to help save his father's Emeryville-based window screens business from bankruptcy. Largely self-taught, he went on in 1956 to found Simpson Manufacturing Co, Inc., which he grew from a small, artisan business that fabricated metal connectors into a world-wide, publicly-traded company, known throughout the construction industry as a manufacturer of over 4000 distinct, highly engineered products for tying one structural element to another in residential and commercial projects. In building the company, he developed a set of company principles--revolutionary for their times--that placed employees at the center of his business. Central to these principles was a compensation system that included broad-based, quarterly profit-sharing along with employee development and education programs that promoted hiring from within the ranks of the company, thereby allowing employees to build life-long careers in which many were able to go from hourly production line labor to management. As US companies increasingly grapple with the role of capitalism in giving back to their employees and the communities in which they are based, Barclay Simpson's philosophy makes for a particularly unusual and relevant American business story. Equally pertinent in these volatile times is the story of how he successfully transferred his core business principles to his philanthropic work, providing major financial and in-kind support to such East Bay non-profit organizations as UC Berkeley, Girls Inc of Alameda County, the California College of the Arts, the Oakland Museum, the California Shakespeare Theater and many others, with a special focus on the arts and the education of low income kids. A story of Barclay Simpson's leadership style as both a business man and a philanthropist, Strong Ties chronicles the astounding continuity between his views on making money, and giving it away.

Katharine Ogden Michaels is the lead writer of The Gambler, a 1997 dramatic film written in collaboration with famed Director Karoly Makk, that won awards at the Brussels, Emden, and Festroia-Troia International Film Festivals. From 2012 to the present she has regularly published essays in the Literary Quarterly, The Threepenny Review, and has recently written an introduction to a new Italian translation of the Joseph Conrad novel The Mirror of the Sea, to be published by Rizzoli in June 2021. She is the co-author of Rembrandt, a Catalogue for a 1989 show of original prints by the artist at the Barclay Simpson Art Gallery in Lafayette, CA. Literary Executor and Editor for the work of award-winning writer Leonard Michaels, she published selected fiction and non-fiction collections of his work in 2007 and 2009. Katharine Michaels is currently working on a fictional memoir called The Fourth Wife. She splits her time between Berkeley, CA and Umbria, Italy. Judith K. Adamson is the author of Backyard Beekeepers of the Bay Area. From 1995 on, as owner of a personal history business, Recollections, she was a ghostwriter for several published personal histories. Currently in semi-retirement, she is editor and book designer for books published by The Lake George Historical Association. She resides in California's Delta.
Loading...
or support indie stores by buying on