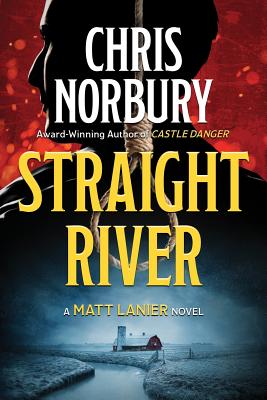 STRAIGHT RIVER, the prequel to the award-winning thriller CASTLE DANGER, is a mystery-thriller set during the emotional and financial aftermath of the Great Recession.

After his estranged father dies in a farming accident, professional musician Matt Lanier returns to his hometown of Straight River, Minnesota. While he's settling his father's estate, an old family friend and neighbor asks Matt for help. Her husband's recent death was ruled a suicide. She insists it wasn't. If she can't disprove that ruling, she'll lose her farm.

The local authorities are uncooperative, so Matt turns to his ex-wife and a young computer prodigy for assistance. As he gets closer to the truth, Matt suspects both deaths are connected to a violent conspiracy with national implications. When the conspirators intensify their efforts to silence him, Matt must decide if it's worth risking more lives--including his--to protect his friend and hundreds of other farmers from financial catastrophe.

Chris Norbury is the award-winning author of the mystery-suspense-thrillers Straight River and Castle Danger. The stories feature Matt Lanier, a southern Minnesota farm kid-turned professional musician whose middle-class world is turned upside down by a conspiracy of powerful, ambitious, violent men.

He grew up in the Twin Cities and earned a B.S. in Music Education at the University of Minnesota. He’s written for several websites as a freelance writer. His essays on wilderness canoeing have been published in the Boundary Waters Journal.
Chris is a member of both the Twin Cities and national chapters of Sisters in Crime. He also belongs to the Alliance of Independent Authors (ALLi), and Support for Indie Authors (SIA). Chris is an advocate of independent bookstores and actively promotes the website indiebound.org to book buyers.

A volunteer Big Brother since 2000, Chris donates a portion of all book sales to Big Brothers Big Sisters of Southern Minnesota. During the golf season in Minnesota, he works on perfecting his golf game. It's an impossible dream but also a good excuse to get out of the office. He lives in southern Minnesota with his wife and golf clubs.

Norbury pens an extremely suspenseful, hard-to-put-down thriller in this prequel to "Castle Danger." The author hooks the reader with intrigue from the early pages and never lets go.
--Valerie Biel, author of the "Circle of Nine" series

This well-told story has a compelling and brilliant plot line. Engaging and twisty (there were several places where "I didn't see that coming ") -- this book is a page-turner that kept me up well into the night.
--Laurie Buchanan, author of "Note to Self" and "The Business of Being."