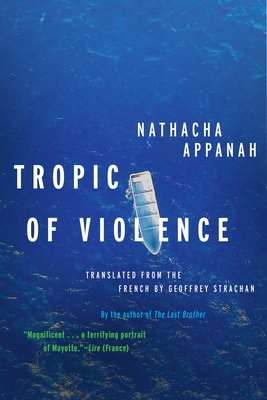 Marie, a nurse in Mayotte, a far-flung, tropical department of France in the Indian Ocean, adopts a baby abandoned at birth by his mother, a refugee from Comoros. She names him Moïse and raises him as her own—and she avoids his increasing questions about his origins as he grows up. When Marie suddenly dies, thirteen-year-old Moïse is left completely alone, plunged into uncertainty and turmoil. In a state of panic, he runs away from home, and sets himself on a collision course with the gangs of Gaza, the largest and most infamous slum on the island.

Nathacha Appanah has deftly assembled a small chorus of voices who narrate the heartbreak, violence, and injustice of life in Mayotte. To Marie’s and Moïse’s perspectives she adds those of Bruce, a terrifying gang leader; Olivier, a police officer fighting a losing battle; and Stéphane, the naïve aid worker whose efforts to help Moïse only make him more vulnerable.

Tropic of Violence shines a powerful light on the particular deprivation and isolation in this forgotten and neglected part of France. At the same time, it is a moving portrayal of the desperation and inequality that are driving refugee crises across the world, and of the innocent children whose lives are being torn apart in their wake. This is a remarkable, unsettling new novel from one of the most exciting voices in world literature.


Praise For Tropic of Violence: A Novel…

“In Appanah’s sobering story, a baby boy, Moïse, abandoned by his migrant mother, is adopted by a nurse, grows into a rebellious adolescent, and becomes entangled with a sadistic teen-age gang leader. Appanah offers a portrait of a place both beautiful and brutal, suggesting that Mayotte, damaged by colonization, corruption, poverty, and neglect, is fated to afflict its inhabitants in turn.”—The New Yorker

“Sharp and unforgettable, this powerful story illuminates the global refugee crisis and its devastating consequences.”—Ms. Magazine

“A dazzling glass mosaic reflecting still-colonial France whose shards are edged with blood. . . . Appanah’s prose is filled with Morrison-esque lyricism, multi-generational narrative, and cutting tragedy. . . . Reading of these lives is like wading in the warm waters of a mile-high cataract. There’s pleasure in every sustained moment, but you find yourself urgently attuned to the fate of a place whose pristine allure is thanks only to neglect.”—The Arkansas International

“[Tropic of Violence] reads with the intimacy of a diary or the directness of testimony, which in the depictions of abject poverty and violence in Mayotte aid in the critique of French colonialism and the failures of postcolonial and humanitarian projects.”—Reading in Translation

“A journalist and native Mauritian, Appanah has a knack for reportorial detail that crystallizes the characters’ commentary. . . . [Tropic of Violence] heralds Appanah as an essential cosmopolitan voice.”—Publishers Weekly, starred review

“How can a story so harrowing, so wrenching be so gorgeous? . . . Surreally relevant, [Tropic of Violence] proves revelatory."—Booklist, starred review

“Spellbinding. . . . By deploying . . . varied perspectives, as well as intensely vivid language to capture the reader's imagination, Appanah renders emotionally accessible a life experience most of us will never fully comprehend.”—Shelf Awareness, starred review

NATHACHA APPANAH, a French-Mauritian of Indian origin, was born in Mauritius and worked there as a journalist before moving to France in 1998. The Last Brother, her fourth novel, won the Prix de la FNAC 2007 and the Grand Prix des Lecteurs de L'Express 2008.
Loading...
or
Not Currently Available for Direct Purchase