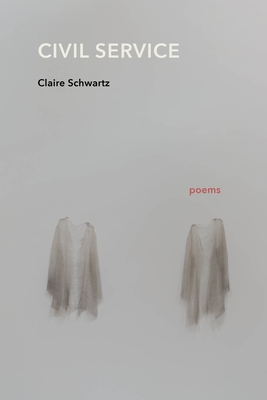 A study in complicity with crushing state violence and an invitation to a chilling, remarkable debut.

While the spectacle of state violence fleetingly commands a collective gaze, Civil Service turns to the quotidian where political regimes are diffusely maintained—where empire is the province of not a few bad actors, but of all who occupy and operate the state. In these poems populated by characters named for their occupations and mutable positions of power—the Accountant, the Intern, the Board Chair—catastrophic events recede as the demands and rewards of daily life take precedence. As a result, banal authorizations and personal compromises are exposed as the ordinary mechanisms inherent to extraordinary atrocity. Interwoven with bureaucratic encounters are rigorous studies of how knowledge is produced and contested. One sequence imagines an interrogation room in which a captive, Amira, refuses the terms of the state’s questioning. The dominant meanings of that space preclude Amira’s full presence, but those conditions are not fixed. In a series of lectures, traces of that fugitive voice emerge as fragmentary declarations, charging the reader to dwell beside it and transform meaning such that Amira might be addressed.

In this astonishing debut, Claire Schwartz stages the impossibility of articulating freedom in a nation of prisons. Civil Service probes the razor-thin borders between ally and accomplice, surveillance and witness, carcerality and care—the lines we draw to believe ourselves good.

“[…] part of Schwartz’s undertaking here is to dissect the role of language in empire and, in so doing, to consider poetry’s ability to communicate directly with the reader and keep them from turning away […]”—Layla Benitez-James, Harriet Books

“Civil Service is a palimpsest of our injured and injurious time. It is the fine work of a poet who has paid long and close attention to things as they are. Unfolding the manifolds of civic life, Claire Schwartz reveals the potent work of language that distills the clutter of the world’s corrupt orders into an urgent wisdom. Here is a poet of astonishing openness, who flees no corner where power lurks unexamined. Schwartz’s great service to us is a book that lingers where ‘you cannot solve time, even with death.’ And from its pages we emerge with better language for the broken world.”—Canisia Lurbin

“In Claire Schwartz’s searing debut, a fugitive named Amira is balanced perilously between existence and non-existence, capture and flight. From the margins, she haunts the text while being subjected to the double entendre of the sentence. Words make her possible. Words confine her. Geometries of hospitality are also geometries of enclosure: the ‘I’ becomes a cell becomes a door becomes a house becomes a carton of milk that nourishes as it sickens. More than a book of poems, Civil Service is a profound statement on the nature of power, written as a fable about freedom in an unfree land.”—Jackie Wang

“When the truth comes in the form not of hard fact but rather of resonant understanding, it looks something like what we find in Claire Schwartz’s Civil Service. These poems are like scripture without mandate. . . . This book bursts forth with overwhelming beauty, power, and ethics.”—Elizabeth Alexander

“The power of this book is in its uncontrollable private will to imagine against the public failure of imagination. The poet dismembers our political reality into the double-edged lines, into the bare and ashamed symbols and silences. Brutal and coy, Claire Schwartz creates a scream out of irony and a rhythm out of the four corners of the page.”—Valzhyna Mort

“We’ve all heard the cliché ‘poems are bombs.’ But Claire Schwartz’s incendiaries whisper hard truths and harder questions, beckoning us closer, seeping gently into our consciousness before exploding the passive and placid thinking that allow us to go about our ‘normal’ lives. Civil Service shines a bright light onto a dark world ruled by property, prisons, patriarchy, and profit.”—Robin D. G. Kelley

“[…] part of Schwartz’s undertaking here is to dissect the role of language in empire and, in so doing, to consider poetry’s ability to communicate directly with the reader and keep them from turning away […]”—Layla Benitez-James, Harriet Books

“The poems in Schwartz’s arresting debut are loosely tied together to form an allegory about oppressive power structures and the harm wrought by even those on the lowest rung of a violent regime.”—Publishers Weekly

Claire Schwartz is the poetry editor of Jewish Currents. Her writing has appeared in Believer, Los Angeles Review of Books, The Nation, The New Yorker online, and elsewhere. She lives in New York.
Loading...
or support indie stores by buying on