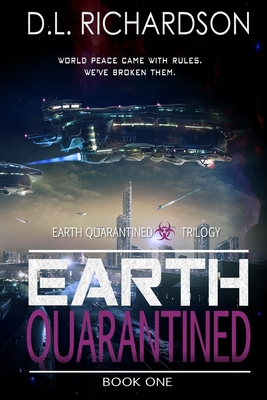 A secret society. Locked away to prevent war on occupied Earth. Today, one of them escaped.

The year is 2355. Earth has been under alien occupation for 300 years, after a bio-weapon got out of control and almost wiped out mankind. We tried to get off the planet, but aliens arrived and placed Earth under quarantine to stop the virus from getting into space. They gave us the cure, and in exchange we were forced to comply with tough control measures designed to save our dying planet and species. Population was controlled. Resources were rationed. Governments were unified. Occupation brought world peace. Mankind recovered, but our planet never did. The need to get into space was stronger than ever.

The aliens agreed to help us, but we're still on this dying planet and they're still avoiding the issue. Which means, the aliens are lying to us.

What they don't know is we're lying to them. 200 years ago, we locked thousands of people away in hidden cities, away from the prying eyes of the Criterion ships that patrol the skies. We had our reasons. Good reasons.

Today, someone from a hidden city escaped.

World peace came with rules. We've just broken them. Earth's salvation is now in the hands of a high-profile celebrity, a woman who shouldn't be alive, a politician with deadly secrets, and an inquisitive alien.

If you like sci-fi thrillers that turn conventional ideas about space exploration on their head, stories with twists and turns, and thought-provoking reads, then you'll enjoy D L Richardson's first book in the Earth Quarantined series.

Earth Quarantined - Book 1 is OUT NOW