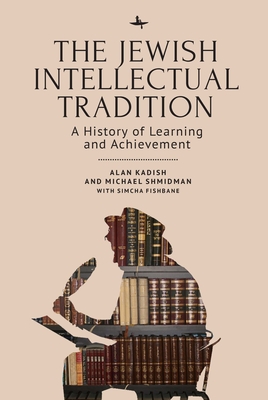 A History of Learning and Achievement (Judaism and Jewish Life)

A series of principles can be extracted from the Jewish intellectual tradition that have broad implications for individual and societal achievement. This book explores the development of these principles and demonstrates how their application can lead to greater intellectual productivity, a more fulfilling existence, and a more advanced society.

Alan Kadish, MD, is President of Touro College and University System, the largest Jewish-sponsored educational institution in the United States. Before succeeding Dr. Bernard Lander as Touro's second president in March 2010, Dr. Kadish distinguished himself as a prominent cardiologist, dedicated teacher and researcher, and experienced administrator. A graduate of Columbia College, the Albert Einstein College of Medicine at Yeshiva University, Dr. Kadish received postdoctoral training at the Brigham and Women's Hospital and at the Hospital of the University of Pennsylvania. He has published over 280 peer-reviewed papers, received numerous grants, including from the National Institutes of Health and the National Science Foundation, and contributed to several textbooks. Dr. Kadish has published articles on the nexus between science and religion.Rabbi Dr. Michael A. Shmidman is Dean and Victor J. Selmanowitz Professor of Jewish History at Touro Graduate School of Jewish Studies and Editor of Touro University Press. He received his PhD from Harvard University and his MA from Hebrew University, and has published and lectured extensively in the areas of medieval Jewish history and Maimonidean studies. Dr. Shmidman also served as Rabbi of Congregation Keter Torah in Teaneck, New Jersey and as Editor of Tradition: A Journal of Orthodox Jewish Thought.Dr. Simcha Fishbane is a Professor of Jewish Studies in the Graduate School of Jewish Studies at Touro College, New York. He has published extensively on Jewish subjects and texts. Dr. Fishbane's publications include Deviancy in Early Rabbinic Literature (2007), The Boldness of an Halakhist (2008), The Shtiebelization of Modern Jewry (2011), The Impact of Culture and Cultures Upon Jewish Customs and Rituals (2016), and The Rabbinic Discussion about Bat Mitzvah Celebrations (2017).
Loading...
or support indie stores by buying on
(This book is on backorder)